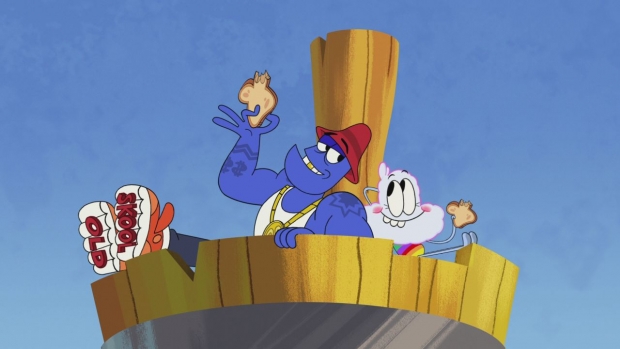 Our friends at Nickelodeon have just shared a “Sneak Peek” clip for the Middlemost Post Episode “The Same Ol’ Same,” premiering tonight, February 25 at 8:30 p.m. (ET/PT).

Del the Funky Homosapien, who guest stars as Old Skool, shared, “I’m so glad Nickelodeon gave me the chance to voice a character in Middlemost Post. Having grown up obsessed with cartoons, it’s something I always wanted to do. In this episode, I really enjoyed the humor of the character and the story.”

In addition, the all-new Rugrats series is making its linear debut on Nickelodeon tonight at 7:30PM (ET/PT). In “One Big Happy Family,” Angelica takes advantage of a family problem to make Tommy and Chuckie play a game of house. Then, in “The Last Balloon,” Tommy and the babies help Chuckie take care of what he thinks is the last balloon in the whole wide world. Episodes will continue to air every Friday night at 7:30PM (ET/PT).

Middlemost Post hails from SpongeBob SquarePants’ alum John Trabbic III and follows a former rain cloud, a brawny mailman, and their magical pet walrus as they deliver packages to the unusual inhabitants of Mount Middlemost. The show has all the familiar fingerprints of a Nickelodeon animated series – 2D animation mixed with real photos, live-footage cut-aways, highly detailed close-up illustrations, a recognizable but bizarre take on the real world and, of course, ample physical comedy.