Disney+ has shared a new trailer and art for Marvel Studios’ She-Hulk: Attorney at Law. 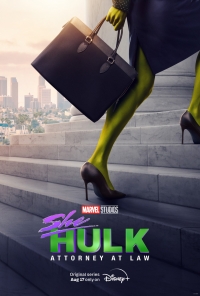 The comedic MCU series is executive produced by Marvel Studios president and chief creative officer Kevin Feige. At Disney’s 2022 Upfront presentation in New York on Monday, Feige was joined by Maslany to unveil the August premiere date and some new footage from the show.

In the spot, Jennifer gets some tutelage from “Smart Hulk” (Mark Ruffalo) on how to cope with the factors that trigger her transformation into She-Hulk, ash she struggles to live a life of anonymity while sticking out like a sore (green) thumb. She also laments the state of her mid-30s single life… though her otherworldly strength seems to go over well with at least one of her dates.

Six episodes of She-Hulk: Attorney at Law, including the pilot, are directed Kat Coiro; Anu Valia helmed three episodes. Jessica Gao serves as head writer, overseeing the narrative direction of a story that “follows Walters as she navigates the complicated life of a single, 30-something attorney who also happens to be a green 6-foot-7-inch superpowered hulk.”

Watch the trailer for She-Hulk: Attorney at Law: