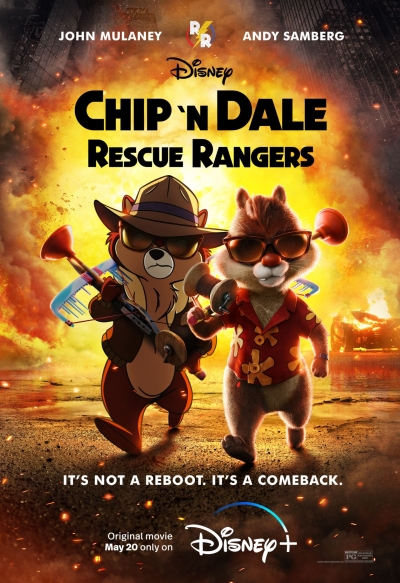 Disney+ has just released a trailer and key art for its upcoming reimagined “comeback” story, Chip ‘n Dale: Rescue Rangers, a hybrid live-action/CG animated action-comedy featuring the classic crazy critter duo who made their screen debut back in the 1940s. The new film, which debuts on the streamer May 20, catches up with the former Disney afternoon television stars, now living in modern-day Los Angeles.

In the film, Chip and Dale are living among cartoons and humans in modern-day Los Angeles, but their lives are quite different now. It has been decades since their successful television series was canceled, and Chip has succumbed to a life of suburban domesticity as an insurance salesman. Dale, meanwhile, has had CGI surgery and works the nostalgia convention circuit, desperate to relive his glory days. When a former castmate mysteriously disappears, Chip and Dale must repair their broken friendship and take on their Rescue Rangers detective personas once again to save their friend’s life.

The film is directed by Akiva Schaffer (Saturday Night Live), written by Dan Gregor and Doug Mand (Crazy Ex-Girlfriend), and is produced by Todd Lieberman (Wonder) and David Hoberman (Beauty and the Beast), with Alexander Young (Extinction) and Tom Peitzman serving as executive producers.

Schaffer, along with Samberg and Jorma Taccone, form the hilarious musical comedy trio, The Lonely Island – we think that’s the group we hear performing “Best Friend” by Saweetie ft. Doja Cat in the teaser trailer released in February. Not sure.

Last summer, Chip and Dale hit Disney+ with a new 2D animated series, Chip ‘n’ Dale: Park Life, directed by Jean Cayrol and executive produced / produced by Marc du Pontavice at the French studio, Xilam Animation. The series was inspired by the classic Disney shorts from the 40s and 50s. Created by Bill Justice, the frenetic pair first officially appeared in the 1947 short, Chip an’ Dale, before going on to star in 24 cartoons alongside Mickey Mouse, Pluto, Donald Duck and other Disney characters.

The also starred in a 1980s half-hour TV series, Chip ‘n’ Dale: Rescue Rangers, as heads of their own detective agency, which set the stage for their new movie… a comeback 30 years in the making.

The Chip ‘n Dale: Rescue Rangers Original Soundtrack with score by composer Brian Tyler will be released by Walt Disney Records on May 20.

Check out the trailer!