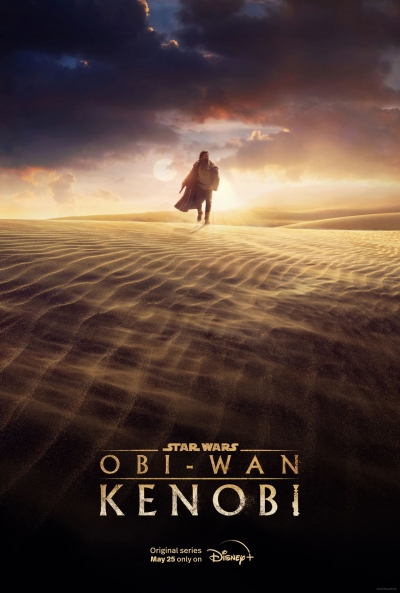 The show, which sees Ewan McGregor reprise his role as the titular Jedi Master, will debut exclusively on Disney+ May 25, 2022.

Obi-Wan Kenobi takes place 10 years after the events of Star Wars: Revenge of the Sith transpired. In that 2005 film, Obi-Wan Kenobi was confronted with his greatest failing — the downfall of his best friend and Jedi apprentice, Anakin Skywalker, who turned to the dark side and became the corrupt and malevolent Sith Lord Darth Vader.

Disney also released an evocative poster to tease the series’ story. The new one-sheet features a stirring wide-shot of Obi-Wan traversing the wind-blown desert of Tatooine, his stride backlit by a glowing sun in an apparent nod to Luke’s walk across those same sand dunes in Star Wars: A New Hope.

Obi-Wan Kenobi’s exclusive premiere on Disney’s streaming platform is part and parcel of the company’s evolving strategy with respect to their core properties. During Disney’s earnings call held yesterday, CEO Bob Chapek said that the company is no longer relying on theatrical releases to build their franchises. He also highlighted the success of the studio’s Oscar-nominated animated feature Encanto, which some analysts were quick to point out was bolstered by its theatrical window before it was moved to Disney+.