The Gilded Age is  Julian Fellowes’ American historical drama television series set during the boom years of the 1880s in New York City. The series centers around the conflict between new versus old money.  The ‘new money’ Russell family moves in across the street from the van Rhijn-Brook family, who are part of the old-money establishment in New York City.

The Overall VFX Supervisor was Lesley Robson-Foster, with VFX Sup. and Designer Douglas Purver. Purver has worked with Robson-Foster for many years. Becky Graham was the visual effects supervisor at DNEG. In total the first season had over 1500 effects shots spread across nine episodes. 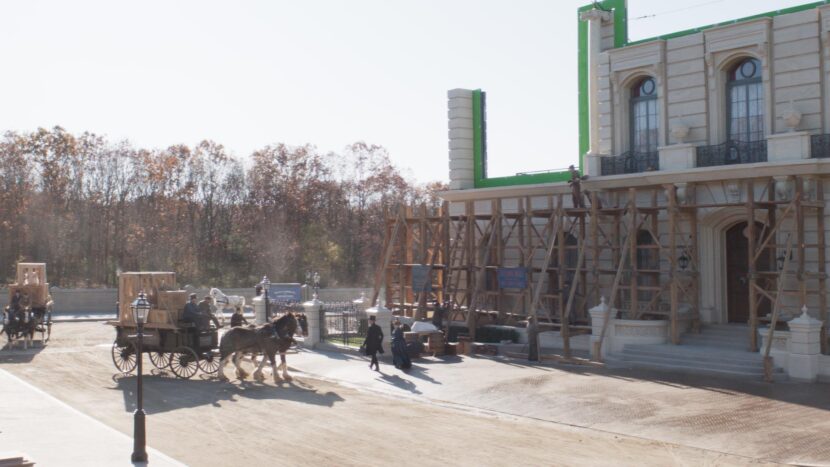 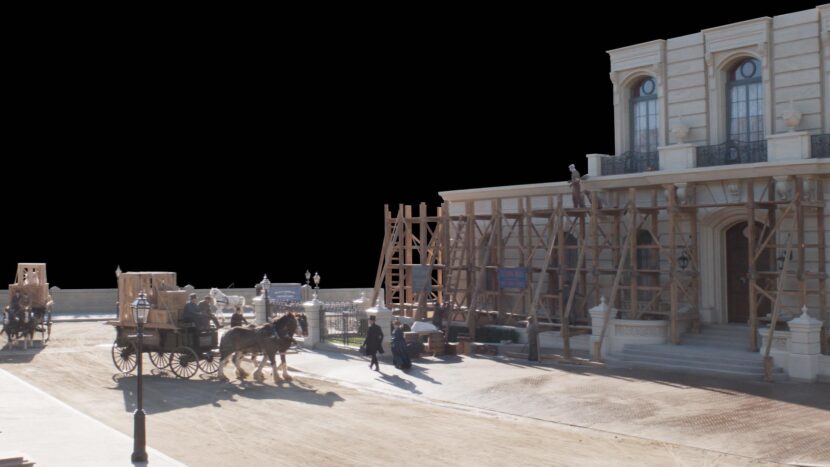 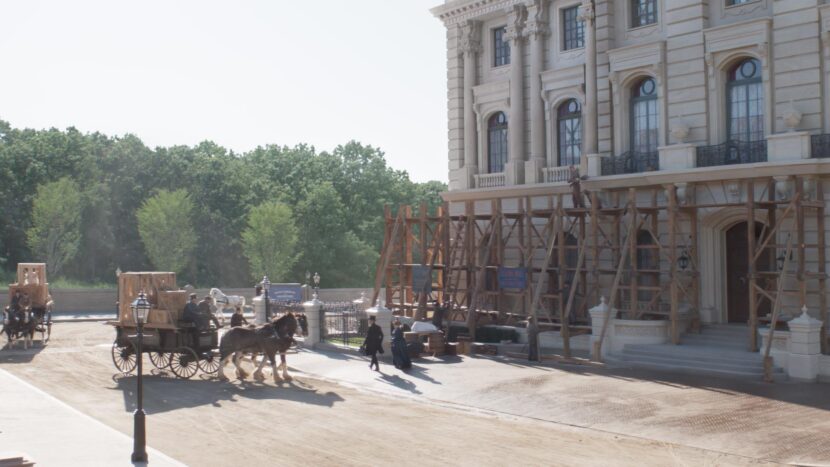 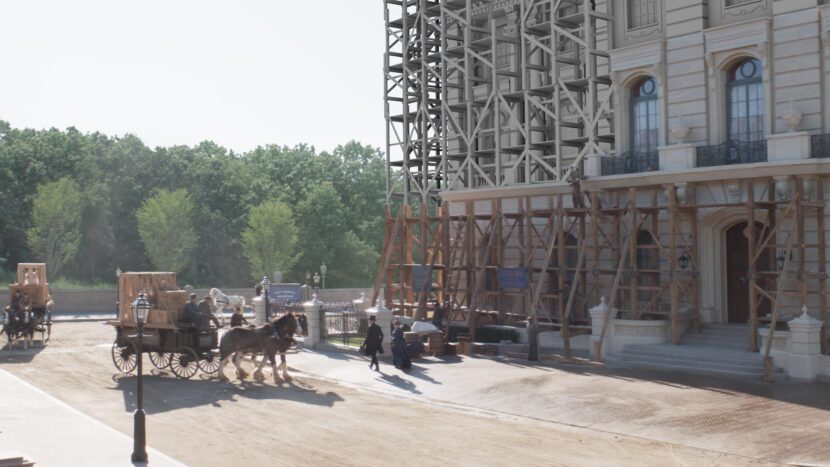 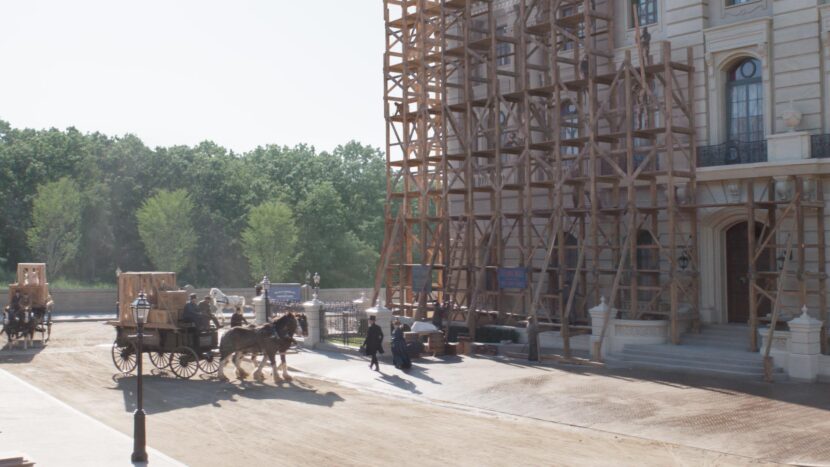 Filming of the series began in Newport, Rhode Island in February 2021, after a COVID delay. In April, filming moved to Lyndhurst Mansion in Tarrytown, NY, and the Hudson River Museum in Yonkers, New York. In May, filming continued in Troy, New York. To recreate the era, Troy’s central historic district had multiple city blocks transformed to resemble a Victorian-era street.  “Our backlot for the main East 61st street was out on Long Island, near our gold coast stages,” explained Purver. A lot of work was required to extend the street up and back, but the sets were still very extensive and detailed. While some of the stories take place in Brooklyn, the city’s film restrictions on filming and the complexity of shutting down streets and covering them in sand and dirt meant that the production could not be filmed in Brooklyn.

As with many aspects of The Gilded Age, the team tried to film as much in-camera as possible. The production did “a lot of photography with the extras walking or crossing the street, etc”, commented Becky Graham. “This also included a bunch of carriages and horses, and variations: carriages with two horses, with a single horse, and then all different tradespeople, and their carriages, so we were able to keep the CG crowd replacement further in the background.”

On the set, there was a huge long container green screen wall. The team took two days to shoot a library of elements that there were then used as static or moving elements. While there was some night library footage shot, the team also regraded day-for-night on many of these background plate elements. 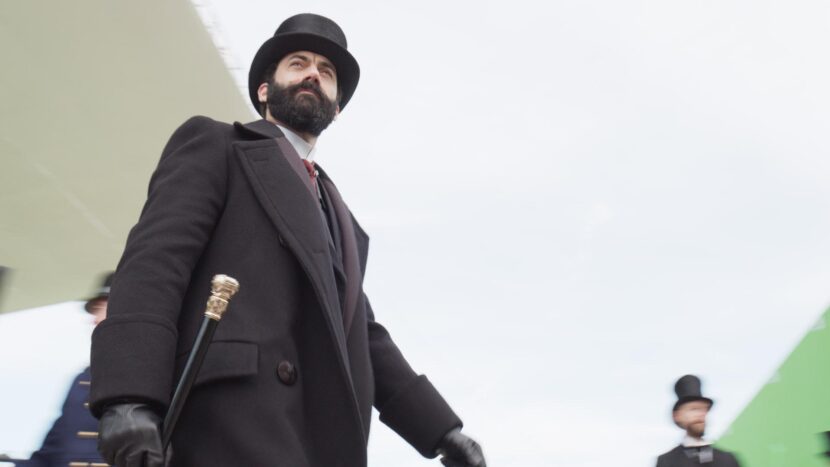 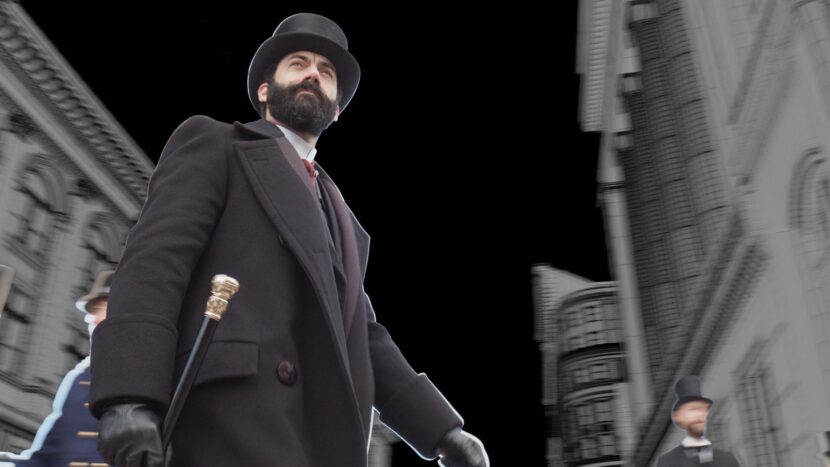 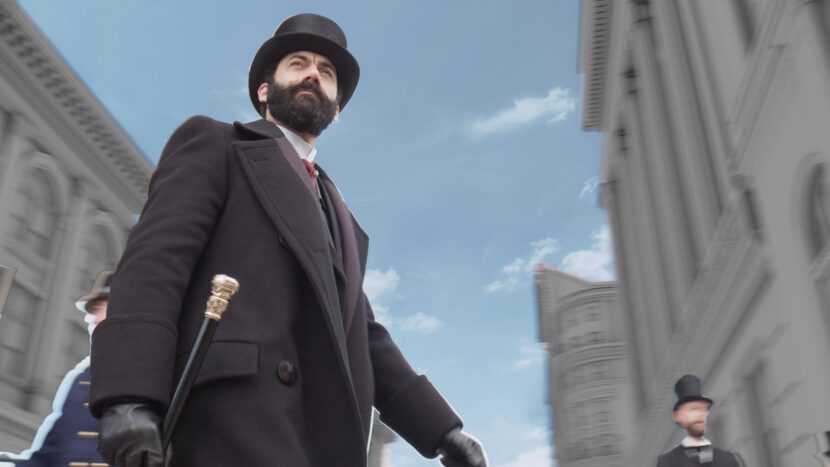 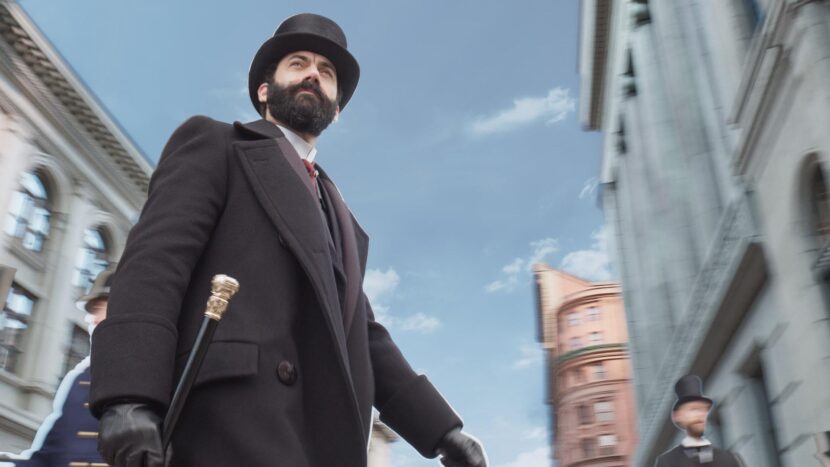 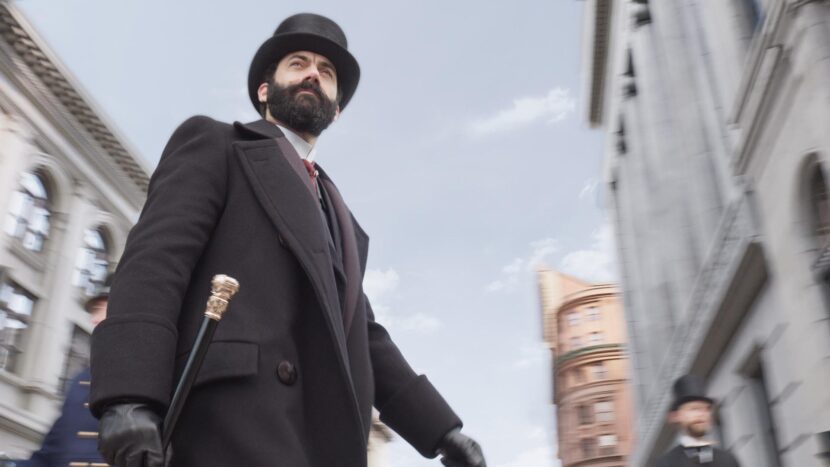 The show was shot on Varicam with two different lense packages for the two different family storylines. “We had spherical lenses for the new-money people – which is nice, clean and crisp,” outlines Purver. “And then we had a set of anamorphic lenses that were used to shoot the old-money story.” The creative team built an entire visual language, allowing the old-money footage, for example, to “have edges fall off a bit and have a little more of a texture to it,” he adds. 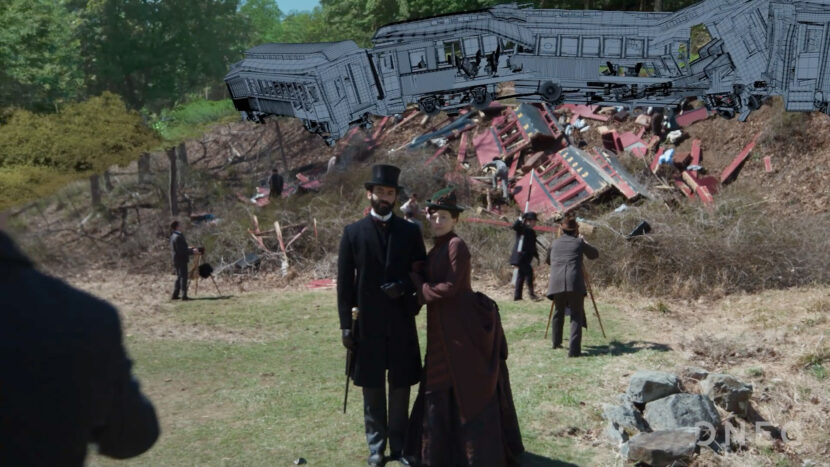 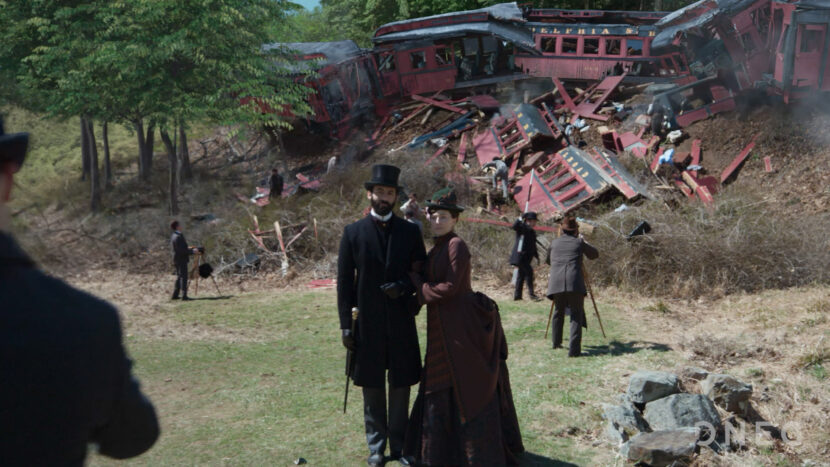 Some visual effects were very specific to individual episodes such as the train crash in episode 6. It was not economically viable to build a huge set for a just a few shots, so here the DNEG team did provide the solution via CG. “The train crash we did was a one off,” says Purver. “That was something obviously we just could not afford to do practically, but the production did provide a bunch of debris on the ground, which gave us really great lighting cues on where the shadows were falling and what values to have for the train’s distinctive red paint. I think it really helped the CG fall very convincingly”.

The DNEG team used their standard pipeline, Maya for layout and models, Clarisse for lighting and rendering. Compositing was done in Nuke, with additional matte painting elements from Photoshop and effects such as smoke from Houdini. 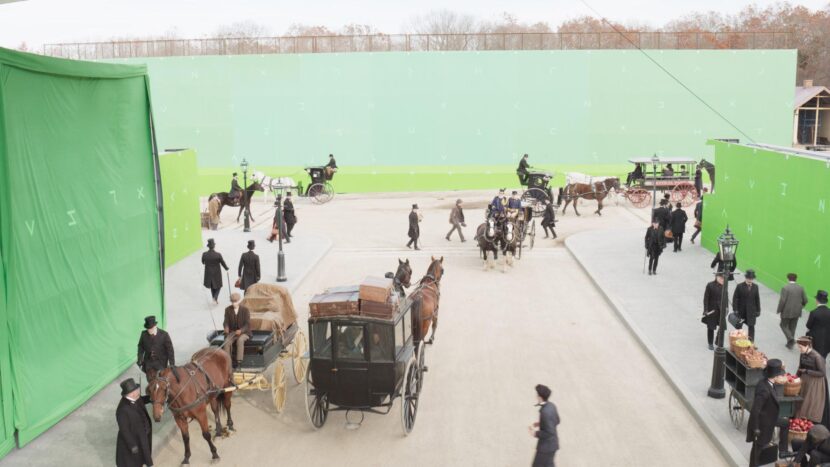 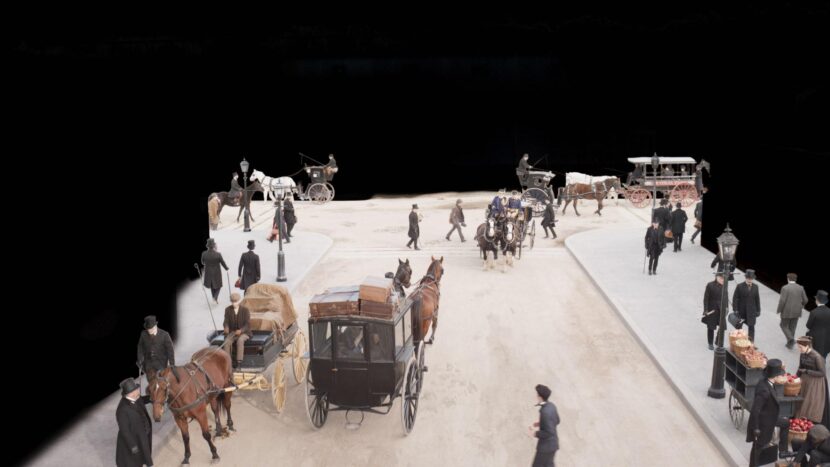 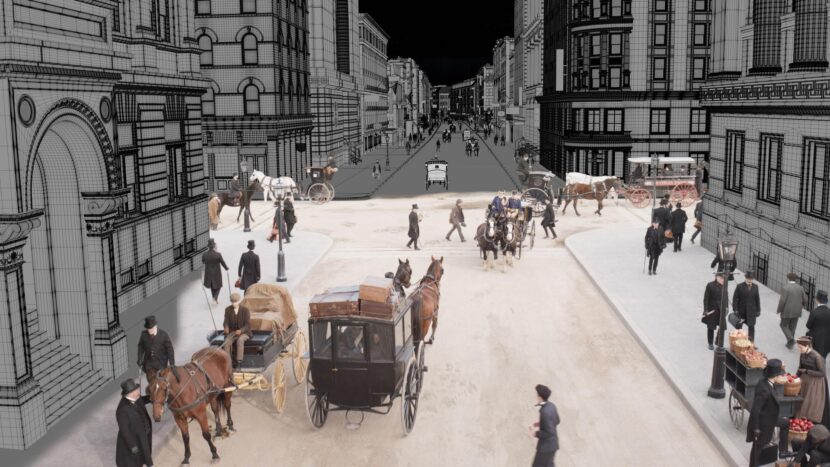 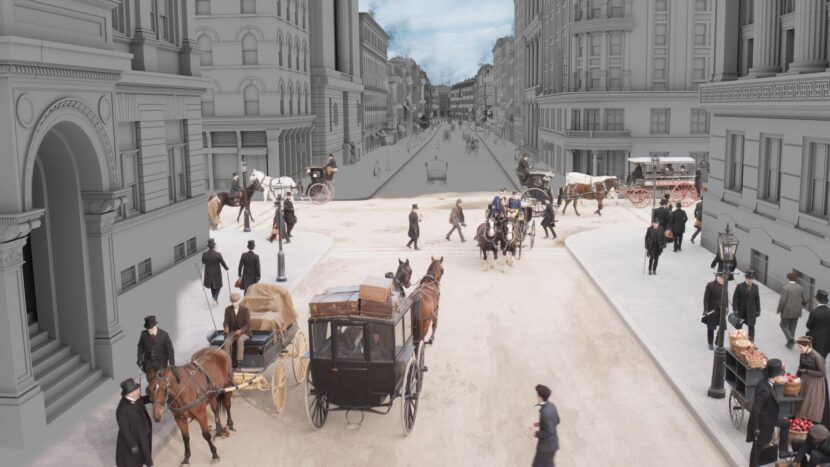 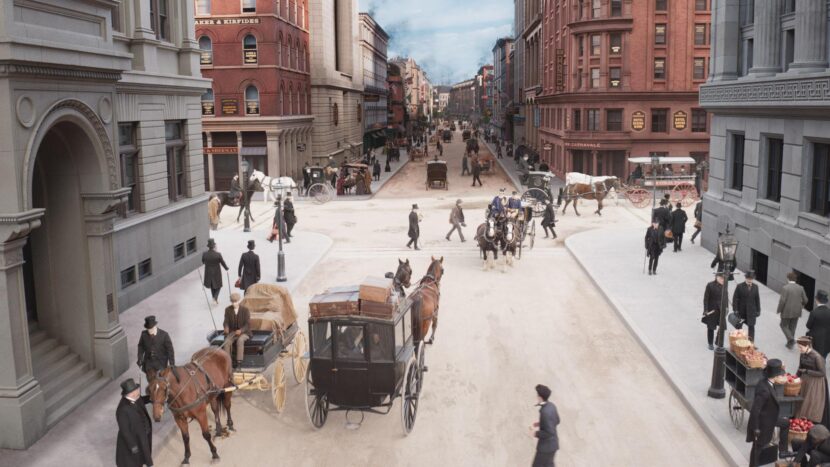 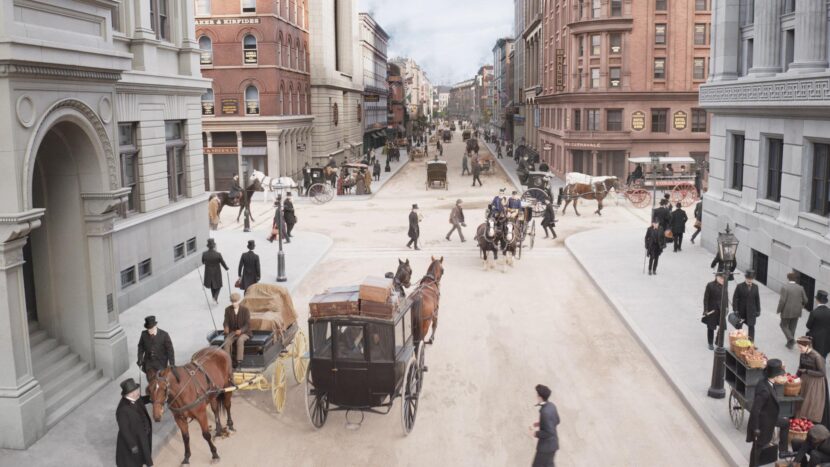 One of the nice aspects of filming large limited episode shows for studios such as HBO is that all the scripts were produced ahead of principle photography and so all the visual effects could be mapped out and handled like a feature film.  The DNEG team knew if a set of locations would feature multiple times or only once. For example, in one scene the actors meet at a park, at the hand from the Statute of Liberty, much like the train crash, this would only be seen in a couple of shots and thus was done digitally. “So we decided to only build the bottom plinth practically,” recalls Purver. “And then we just had a big pole sticking up for reference tracking.”

For other sequences, such as the turning on of the electric lights at the New York Times Building, the production needed to provide a lot more on-set for VFX to build upon. While the DNEG team would end up recreating the New York Times building, it was key to have lighting coming from where the building would be in the final shot. In some sequences such as the Ballroom dancing, practical lights had to be removed carefully from plate photography with roto and orate ceilings replaced. The challenge for the Times building was very different. The building comp would easily hide the lights, but it was getting enough lighting to simulate the light coming from a seven-story building, that was critical. While DNEG could have graded or added light effects to composited crowds, in reality, all the contact lighting and fall-off was primarily done in-camera, thanks to a huge lighting rig and clever positioning of the extras and crowds. Again real horses and carriages were filmed and layered up as part of the Nuke comp. 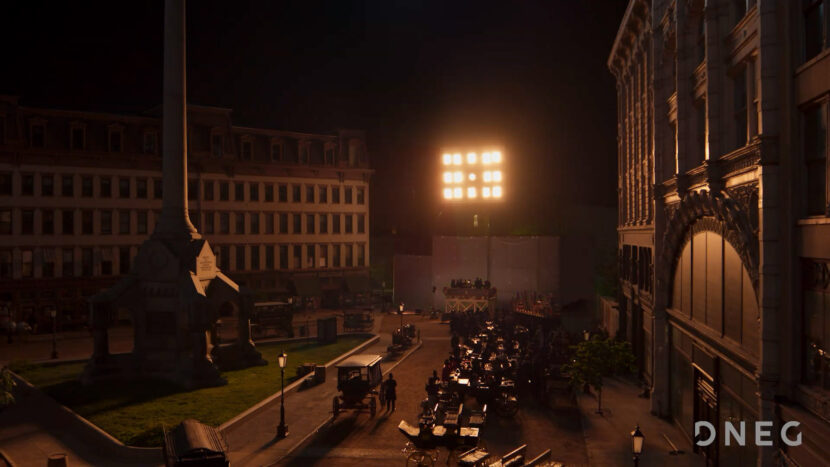 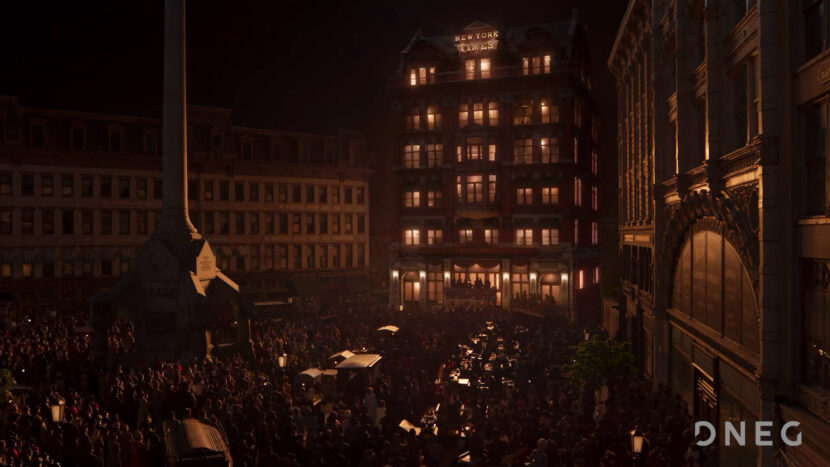 To help frame up the buildings that were not on set and that would be added later in post, the DNEG team provided an AR iPad rig. “I had it on set with me,” says Purver. “And when the DP was composing a big wide, we’d throw it up and be able to see how tall the Russell House was or whatever. It was very useful. Aside from the ‘magical experience’ that it gave every producer that walked on set, it was very useful to the camera operators who were trying to compose these shots.”

The AR Kit app was more than a spherical map. “It was an overlay of actual 3d buildings onto the set,” adds Graham. “We had tracking markers on the ground using QR code markers, which could then orientate and snap everything into place and also allow Douglas to make changes that could then be fed back and update the 3D scene for VFX.” 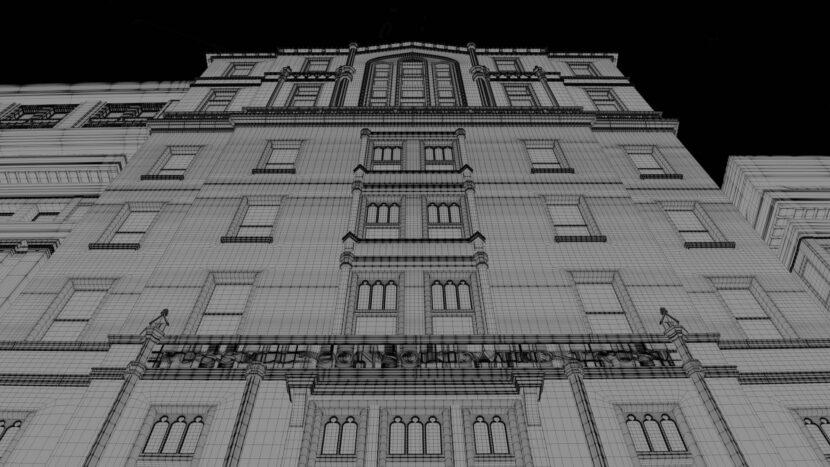 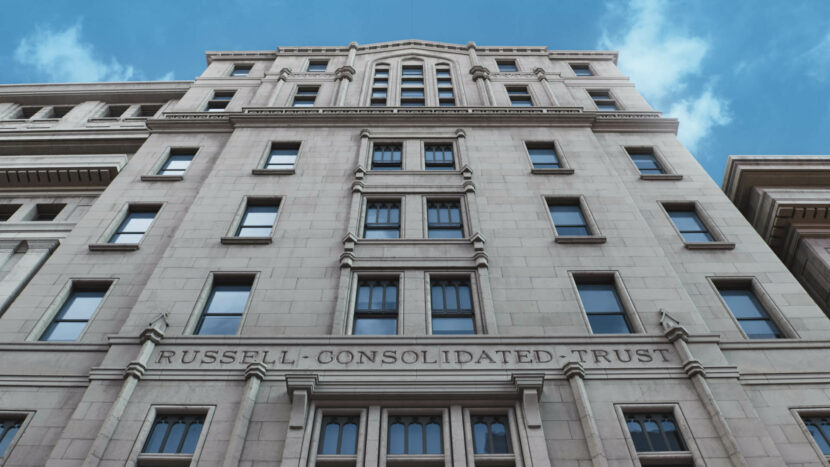