Sustainability and green environmental issues are key topics in all sectors of media and entertainment. Environmental factors that need to be considered are travel needs, lighting energy consumption, post-production complexity, render-farm power consumption, energy sources, and many more. COVID-19 accelerated Virtual Production technologies, in particular, large LED walls for In-Camera VFX (ICVFX).  Screen New Deal (2020) estimated an average CO2 demand of 2840 tonnes for tentpole film productions (see below). This was compiled from an analysis of data provided by 19 productions across four production companies. However, these tent-pole productions did not consider VFX.

To date, there is little to no knowledge on the sustainability of Virtual Production and how it compares to traditional offline VFX productions. The team at Filmakademie Baden-Württemberg and the Animationsinstitut in Germany have investigated this and published their findings.

It turns out that compared to a traditional film, virtual production (VP) can consume about a third of the energy needed for a comparable offline rendered production. VP is a sustainable and also green shooting solution, especially if run on renewable energy. (Which is how VP is powered at Filmakademie Baden-Württemberg).

The report outlines two productions as exemplars of traditional and LED volume productions, each being similar in scale and complexity. The team then calculated all the time, power and requirements of each and compared. The productions compared the offline production Sprout  (2019) and the most recent production Awakening which was filmed as a Virtual Production as part of their Set-Extension Workshop (2021),  an annual seminar at Filmakademie Baden-Württemberg.

It is also worth noting with LED stages appearing all over the world, travel costs can be reduced as real sets can be digitized into virtual environments for LED stage volumes. One film production’s normal air travel in non-COVID times equates to 11 one-way trips from the Earth to the moon. Crew and cast vehicles’ average fuel consumption alone could fill the average car tank 11,478 times. In many cases, given the same amount of time on set, LED Stage Volumes produce more material (or recorded frames), thus all these additional indirect costs can also be reduced. 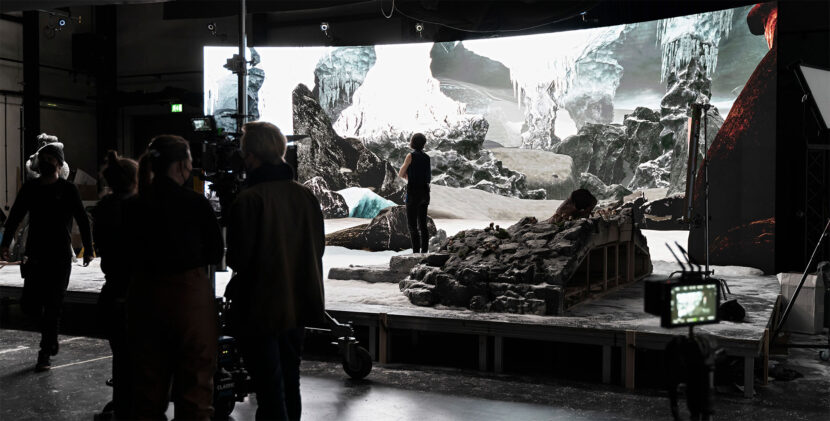 The report did not however fully account for lighting. Both LED volumes and traditional productions involved studio lighting, which is can be a major addition to any energy budget. While a LED volume may need less practical lights, the LED Wall itself does act as a light source.

The project not only highlighted power in Watts but carbon emissions of a traditional film pipeline. Of course, just moving to VP stages is not enough.  There are also many other aspects that should be included when thinking about the green status of filming. For example, The staggering number of plastic water bottles used on-set of a normal film is about the same as the yearly use of about 168 people.

While the Filmakademie Baden-Württemberg report does not suggest LED volumes and VP are the solution to everything, “it should be considered as a fantastic opportunity” to provide professional filming in an environmentally friendly and sustainable way, the report concludes.