Horror Has a New Name – ‘Winnie the Pooh: Blood and Honey’ 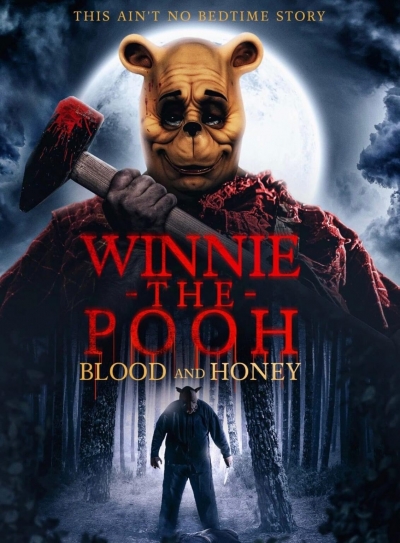 Ouch, right in the childhood! The first Winnie the Pooh: Blood and Honey trailer dropped Wednesday, showing a new side to the classic silly ol’ bear and porcine sidekick– serial killers.  According to the trailer, Pooh (Craig David Dowsett) and Piglet (Chris Cordell) have been abandoned by Christopher Robin (Nikolai Leon), turning wild with murderous results.

The trailer opens with Robin returning to the Hundred Acre Wood with his fiancé to introduce his childhood friends, but once there it becomes obvious things have gone amiss, and soon his fiancé is dead. A Pooh and Piglet killing spree montage follows. Go ahead… talk amongst yourselves.

How could Disney allow such a distorted take on their loveable bear?  After all, it wasn’t that many years ago they released their own live-action / 3DCG hybrid version of the classic story. And of course, they’ve produced numerous animated works with Winnie and his cadre of loveable critter friends.

Well, because it’s not their bear. No permission was necessary, as 2022 marks the year that A. A. Milne’s 1926 “Winnie-The-Pooh” tome entered the public domain; now anyone can use the bear’s likeness in whatever form they see fit.   For director Rhys Waterfield (Firendo, Demonic Christmas Tree) and Jagged Edge Productions (Croc!, The Curse of Humpty Dumpty), blood thirsty slasher was fitting.

In an interview with Variety, Waterfield concedes that the film is, “a really wacky concept, it’s very easy to go down a route where nothing is scary and it’s just really ridiculous and really, like, stupid. And we wanted to go between the two.”

Additionally, Waterfield added that audiences “shouldn’t be expecting this to be a Hollywood-level production.”

That being said, Waterfield called the response to the stills released in May “absolutely crazy [and] because of all the press and stuff, we’re just going to start expediting the edit and getting it through post-production as fast as we can [while] making sure it’s still good.”

Winnie the Pooh: Blood and Honey does not yet have a release date.

Whitney is a freelance writer focusing on VFX-driven fantasy film & TV as well as preschool animation.