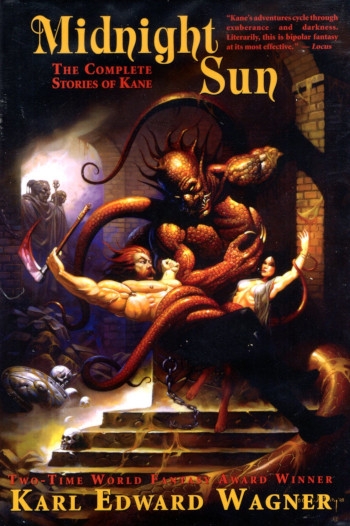 According to The Hollywood Reporter, “Lee, Trapani and Schneider – who count It, Winchester, and the Paranormal Activity movies among numerous credits – will produce what could end up as a series or feature film. Keith Previte and Kevin Elam of the Karl Edward Wagner estate will also produce.”

In total, Lee, Trapani, and Schneider have scooped up the rights to adapt three novels and 20 short stories — all of which are set against ancient historical backdrops and incorporate elements of war, romance, horror, and dark fantasy.

Wagner’s “Kane” stories have amassed a devoted cult following since they were first published in the 1970s. An immortal warrior versed in the ways of combat and the dark arts, the character has drawn comparisons to Conan the Barbarian, who served as one of Wagner’s key influences. (When he wasn’t writing Kane stories, Wagner edited and published “Conan” collections himself.) Still, Wagner repeatedly distanced the character from those comparisons in interviews, pointing out that Kane had more in common with gothic archetypes of the 18th and early 19th centuries than with Conan, who didn’t dabble in sorcery.

Lee, Trapani, and Schneider are currently developing The Hawkline Monster – a gothic western being directed by Yorgos Lanthimos – with New Regency. Lee is now in production on the Stephen King feature adaptation Salem’s Lot and is in post-production on director Olivia Wilde’s Don’t Worry Darling. Trapani recently served as co-producer on Hulu’s docu-series on the Los Angeles Lakers, Winning Time. Schneider’s most recently worked as producer is Paranormal Activity: Next of Kin, which was released exclusively on Paramount+ last October.