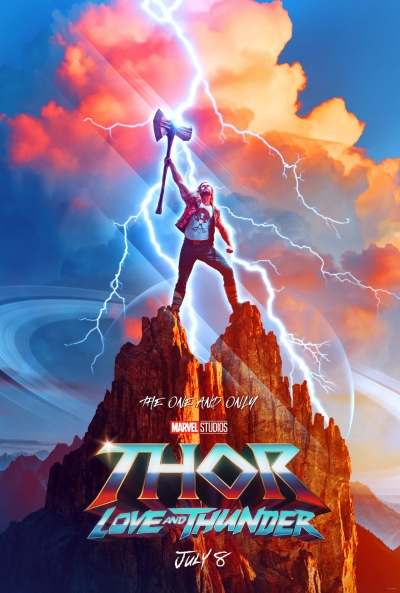 Marvel Studios unveiled a new trailer and poster for Thor: Love and Thunder, giving fans a glimpse of what awaits them in the upcoming Thor: Ragnarok sequel.

Set to a needle drop of Guns N’ Roses’ “Sweet Child O’ Mine,” the 90-second spot cues us into Thor’s (Chris Hemsworth) search for meaning and identity in a life that’s now unburdened by bloodshed. “These hands were once used for battle. Now they’re but humble tools for peace. I need to figure out exactly who I am,” the Asgardian god of thunder intones.

Of course, any period of tranquility in a Marvel movie is short-lived. Per the film’s official synopsis:

“[Thor’s] retirement is interrupted by a galactic killer known as Gorr the God Butcher (Christian Bale), who seeks the extinction of the gods. To combat the threat, Thor enlists the help of King Valkyrie (Tessa Thompson), Korg (Taika Waititi) and ex-girlfriend Jane Foster (Natalie Portman), who – to Thor’s surprise – inexplicably wields his magical hammer, Mjolnir, as the Mighty Thor. Together, they embark upon a harrowing cosmic adventure to uncover the mystery of the God Butcher’s vengeance and stop him before it’s too late.”

Directed by Thor: Ragnarok helmer Taika Waititi, Thor: Love and Thunder is produced by Kevin Feige and Brad Winderbaum. Waititi has reportedly described his film as a romance, and from the looks of this trailer’s emphasis on themes of true love and friendship, that description is apt. Its retro soundtrack also suggests that the director will be keeping Ragnarok’s hard rock stylings firmly intact.

Back in 2017, AWN spoke with artists at Oscar-winning VFX hub Framestore on how they created one of Thor: Ragnarok’s most memorable scenes: a battle between Thor and an army of undead soldiers atop Asgard’s Rainbow Bridge.

The VFX for Thor: Love and Thunder were handled by Industrial Light & Magic, with Frazer Churchill and Hayden Landis serving as visual effects supervisors. (See ILM’s full team for the film here.)

Thor: Love and Thunder is slated for a July 8, 2022 theatrical release.