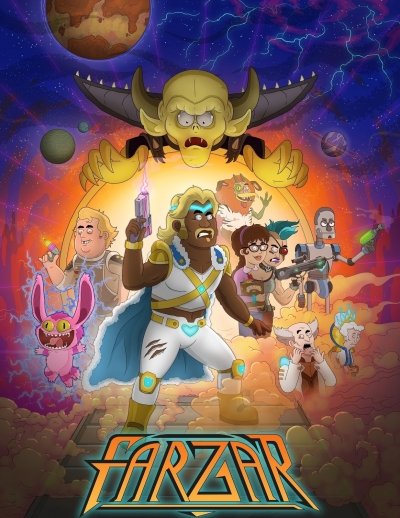 Netflix has just announced the voice cast for their animated sci-fi comedy series, Farzar, the inaugural project of the multi-year deal the streamer signed back in early 2021 with Brickleberry and Paradise PD creators Roger Black and Waco O’Guin. No release date has been provided for the 10-episode first season.

Farzar is billed as an outrageous sci-fi comedy that follows Prince Fichael and his crew as they venture out of their domed human city to fight the evil aliens that want to kill and/or eat them. As they begin their journey, Fichael quickly discovers that all is not what it seems, and he may be living a lie.

Co-stars include Grey DeLisle (The Loud House, The Simpsons, Robot Chicken) as Queen Flammy, the queen of Farzar, Fichael’s mother and Renzo’s wife; and Carlos Alazraqui (Reno 911, Kamp Koral, The Casagrandes) as Zobo, a mischievous little alien known as a chaos-celot, a species of aliens who feed on chaos.