The cape heralded a new wave of cloth simulation in movies.

With the release of Matt Reeves’ The Batman this week, I thought it might be fun to go back to an article published in issue #1 of befores & afters magazine about CG capes, and a section of that article which ran down PDI’s very early CG cape work for Batman Forever from 1995.

Take a journey back in the VFX time machine to learn how PDI managed to pull off this incredible work in those early CG for film days. It includes details of the test that PDI had to do–one of several tests done by different studios–to win the job, and it surprised even the team at PDI.

Joel Schumacher’s Batman Forever, released in 1995, featured some elaborate Batman stunts. So much so that a computer-generated hero, realized by Pacific Data Images (PDI), was employed for a couple of scenes; it enabled production visual effects supervisor John Dykstra to stage dramatic flying and landing action that would have been difficult to achieve purely with practical stunts.

But in the early to mid-90s, CG digital doubles were still a rarity, and crafting convincing cloth simulations a very difficult undertaking. To see what might be possible at the time, Dykstra invited several visual effects studios to create a test for a digital Batman jumping out of a building as the camera followed him down for a landing on the street below.

“Everybody did a test,” recalls PDI co-founder Richard Chuang. “We ended up winning the test, but it turns out it was for the stupidest reason. I can now reveal the industry trick that won us that contest.” 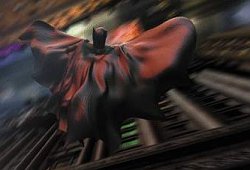 Chuang explains that the production gave PDI and every facility doing a test the same motion capture data of a performer carrying out the jumping action. The background for the action was generated by Warner Digital.

“We’d been doing CG characters for a while and we did the CG Batman,” says Chuang. “To be honest, it was a bit of a rush job, it wasn’t perfect. But here’s the trick, and it had nothing to do with our Batman at all. In the animated footage from Warner Digital, the camera came to a sudden halt on the ground. In everyone else’s tests they used this footage so that Batman landed with a ‘clunk’. I didn’t think that looked right. Instead, we tracked the camera motion and then added a little overshoot and camera bounce to it, as if somebody hand-held the shot. That’s the only thing we did differently, but it made the shot incredibly more watchable. When the people at Warners saw it, they said, ‘Wow, this is so great!’”

PDI secured the CG Batman work, part of which required the creation of a convincing CG cape. Did it need to be simulated? Could it be hand-animated? These were things the studio had to work out how to do, essentially from scratch. Chuang remembers PDI’s Drew Olbrich at the time declaring that he would just write a physics simulator to explore full cloth simulation—“He wrote it and blew us all away.”

What Olbrich wrote was a proprietary tool that plugged into PDI’s animation system called ‘script’ and ‘e_motion’, which Chuang had written with Glenn Entis several years earlier. Olbrich’s simulation tool dealt with the required billowing, flapping and bat shape of the cape attached to a CG digi-double of Batman. Suddenly, it was no longer just a cape but a character in its own right. And that’s exactly how the director treated it. 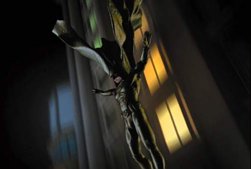 “Joel Schumacher would look at our work and say, ‘Let’s go to this frame. On this frame I want the cape to do this.’ He was directing it. I turned to the guys on my team and they had turned pale. I mean, that’s not how simulation works. You can’t direct simulation!”

Chuang says that PDI initially tried to solve the need for specific cape behavior by implementing what they called ‘blow-dryer’ animation. “We literally put all these virtual fans in position to blow the cape around, trying to get it to act the way the director wanted. It was a completely ridiculous way of doing it. Eventually we just animated 70% of it and let the sim add the flutter.”

The digital Batman Forever Batman, complete with cape, would ultimately be considered one of the first photoreal full-body digital stunt performers in a film, paving the way for so many synthetic superheroes to come. PDI continued to advance the art in the Schumacher follow-up, Batman & Robin (1997), in particular adding a muscle system to the mix.

For Chuang, it was a memorable journey into digital humans at a time when so few of them were around. “I still remember when we got the capture session data for that first test, and it was just points floating in the air. They said, ‘Oh, there’s no software. You have to figure it out yourself.’ Actually, that is one thing I really enjoyed about those early years in VFX. I loved when people came to us with a problem, and we’d go, ‘We have no idea how to do this.’ But we worked it out.”