Reacher follows Jack Reacher (Alan Ritchson), a veteran military police investigator who has just recently entered civilian life. Reacher is a drifter, carrying no phone and the barest of essentials as he travels the country and explores the nation he once served. 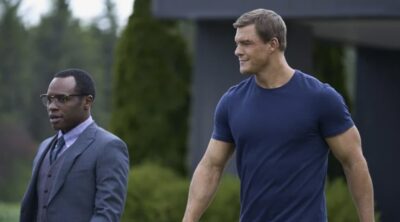 When Reacher arrives in the small town of Margrave, Georgia, he finds a community grappling with its first homicide in 20 years. The cops immediately arrest him and eyewitnesses claim to place Reacher at the scene of the crime. While he works to prove his innocence, a deep-seated conspiracy begins to emerge.

Season One of Reacher is based on Lee Child’s first Jack Reacher novel Killing Floor, and is written for television by Emmy-nominated writer Nick Santora (Scorpion, Prison Break), who also executive produces and is the showrunner for the series. SpinVFX produced over 500 shots including photo-realistic CG animated sequences, fire, explosions, and environmental set extensions. The first season was released in February 2022. A second season has already been ordered. 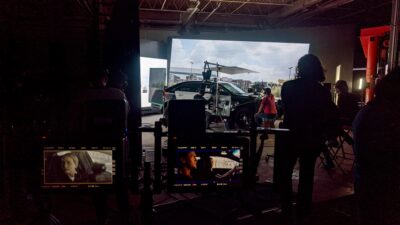 As the show was set in a real-world environment, photo-realistic visual effects were crucial. Without a seamless integration with the live-action footage, the viewer would be taken out of the story. A CG police car crashing into a river and sinking to the bottom, set extensions of Georgia and Paris, and a climactic warehouse fire – were just a few of the VFX sequences. Interestingly, all of the car and interior vehicle shots of the whole series were done using tight LED virtual production.

SpinVFX’s Bert Poole was based in Toronto and Keith Adams in Atlanta, with the work  done in both Spin office locations. Kris Wood was the Reacher show-side VFX Supervisor. Bert Poole was on-set to run the ROTATE LED work and helped to supervise the post-VFX work with Keith Adams. Steve Ramone was the compositing lead.

FXG: Could you talk about the traveling car shots in the show?

Bert Poole: For the bulk of the car shots on Reacher, we leveraged Spin’s ROTATE division to playback driving plates on our mobile LED walls. We had 4-5 days of shooting for all vehicles ranging in size from a police cruiser to a 40-foot prison bus. Prior to filming, we consulted with the Reacher production to select and prepare plates for every set-up so that on the day we had everything ready to roll. In addition to preparing the plates for playback, we also enhanced and augmented the plates. A good example of this is the night driving footage through the country where additional houses, porch lights, and trees were added by our compositing team to get the desired feel. We also prepared multiple speeds of our footage so that on the day we could easily swap in faster footage as required. This was in addition to the live grading work being done on-set for the final adjustments and any key-stoning of the footage to perfect the perspective. In addition to the grading work, we also implemented a system for pixel-sampling portions of the plate for the output of color data to DMX lights on set. This creates an authentic feeling to the set lighting as it reacts to the playback. 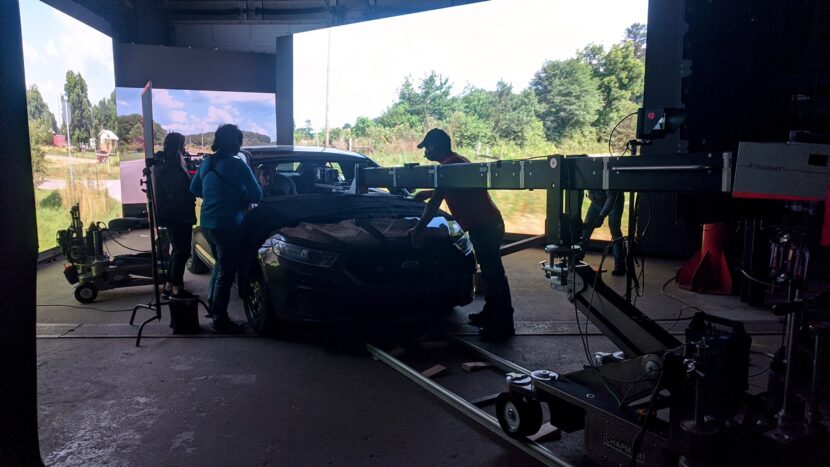 FXG:  Is the ROTATE rig mobile? How large is it? I assume it is running UE4 and actively tracking?

Bert Poole: ROTATE features both a fixed LED space and a mobile on-the-go setup. For Reacher, we leveraged both our Rotate space and the Reacher production’s space. Within our LED setup for Reacher, we would typically have a fixed wall, two mobile walls, and a 50x50cm set of tiles on a scissor lift for a mobile light/reflection source. As well, we had an overhead screen and projection setup to capture sky reflections. Our biggest LED setup was for the bus which featured a 50×12 and 30×12 foot wall for the sides and a 20×12 foot wall for the front. While not used on Reacher, ROTATE does utilize Unreal’s nDisplay technology for Mandalorian-style virtual production including with live-playback of plates rendered in Unreal on hemispheres and utilizing a live camera track. Given the nature of the shots and the loss in fidelity compared to shooting the raw plates, it was determined that the more straightforward route would meet the needs with the highest quality. 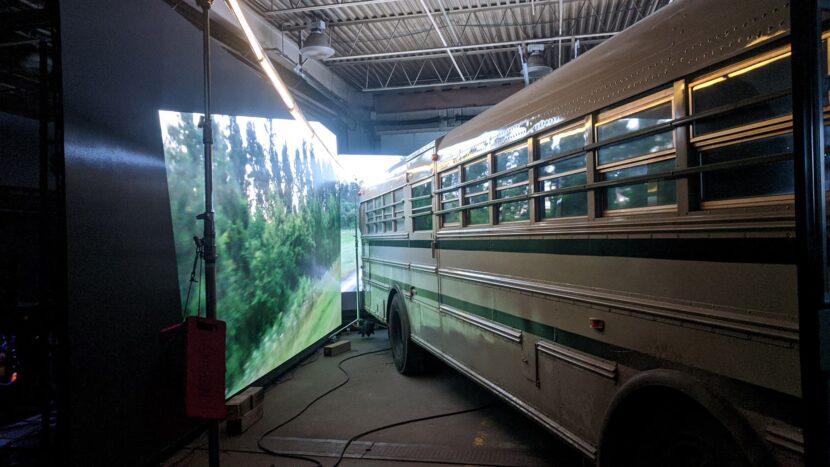 FXG:  So all the scenes outside the car windows were based on photography?

Bert Poole: It was all driving plate work with some augmentation in compositing.

FXG:  Approaching a bridge, a cop car swerves, cashing through guard rails, and splashes into the river. Quickly sinking, it settles at the bottom of the river with the characters trapped inside. – I understand this was a traditional green screen?

Keith Adams: Setting the underwater look was crucial, it had to strike a delicate balance between photo-realistic believability and match the lighting of the above-water environment and most notably the lighting on the characters inside the car.

We asked the question, ‘What would reality look like, twenty feet under silt-filled water at night?’ :-  Black – we all agreed black or at least almost black. The live-action bridge had a few small lights that lit the road and there was a believable moonlit environment above the water. Using these small light sources as cues, we backlit everything underwater making the most of every small amount of light we were given in the live plate. The cop car, the bubbles rising, the water disturbance above were each backlit from above creating the environment. Foreground vegetation was strategically placed creating black silhouettes over the dark underwater environment. This gave depth to the scene and defined the bottom of the riverbed in relation to the sinking movement of the car.

The next scene takes place inside the car at the bottom of the river. This scene required practical water filling the car, leaking from each window and rising from the floorboard. In this case, a traditional green screen was used instead of the LED screens that were used throughout the show.

This gave us the flexibility to set the look based on the previous full CG scene of the car sinking and to match the lighting established onset. 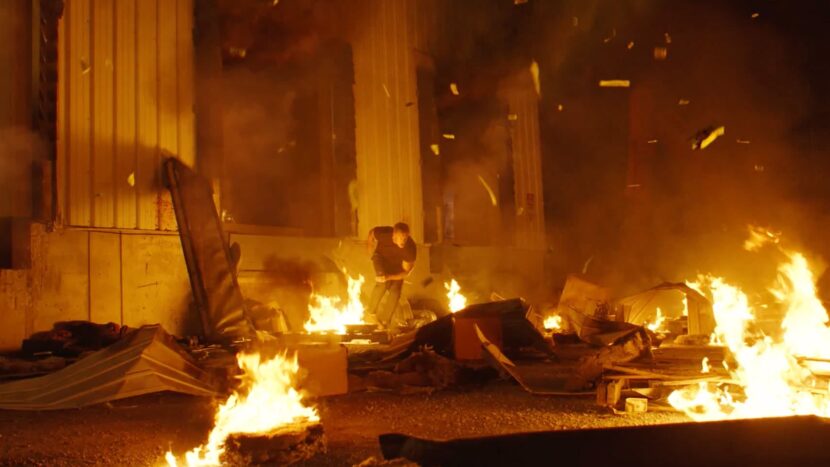 FXG: For the final Ep 8, there is a complex and extensive warehouse fire. The sequence is a fight scene involving multiple characters that move through a maze of boxes, catwalks, and industrial equipment as the fire slowly builds until it becomes a fully engulfed inferno. I believe there were no actual flames on set?

Keith Adams: The scene was shot with no actual fire, only strategically placed lighting to create the ambient firelight and onset FX fog to mimic smoke.

The first issue was how to deal with progressive continuity. In other words, the fire’s location must be consistent from shot to shot while also growing and spreading from shot to shot. It would have been easy to invest a lot of time into a single shot only to realize when it was cut into the scene that it did not fit, therefore mapping the progressive nature of the fire when an eye to continuity was essential.

To do this, we worked with the finished edit to map out the placement and growth of each fire using simple word annotations with scribbles for fire. Viewing the shots in the edit sequence we could get a rough feel for how the speed and movement of the fire should behave to hit certain story points. It was easy to make adjustments before the animation work began. These simple annotations became the roadmap to animate the fire for the whole sequence.

From there, we chose several hero shots spread throughout the sequence. This not only allowed us to establish the look but also set a kind of mile marker for where the fire should be at any given hero shot. We knew that shots leading up to a hero shot must grow to a certain point and could not progress past a certain point. 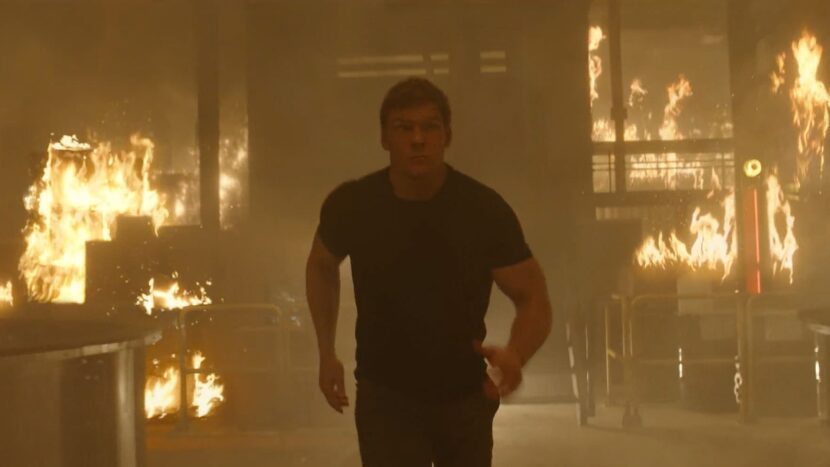 FXG: The fire or explosion effects – were these simulated in Houdini?

Keith Adams: The fire itself was done using traditional Houdini FX as well as an assortment of stock footage and lots of added dynamic lighting. Early on, we also created an assortment of various fires we could choose from allowing artist comp to fill out areas as needed for finishing.

The end of the warehouse fire is punctuated by a series of massive explosions. On set, the warehouse explosions were shot with small charges creating minimal explosions but most notably a bright flash of light. This was extremely helpful as the live plate had most of the ambient light required for an explosion. Another great benefit of the small charges onset was that it gave the actors a real explosion to react to. Often with multiple actors in a single scene, it is difficult to create unified eye lines, timing, and action without an on-set prompt. The small charges solved this.

Houdini was then used to create larger explosions that billowed at the scale and speed of what a much larger explosion would have been. Debris was modeled and added to complete the effect.

FXG: Does Spin use any interesting plugins or Nuke Gizmos or tools in comp?

Bert Poole:  Spin VFX has a robust Nuke implementation with a suite of proprietary tools from past work. In achieving squib hits from guns or laying in fire, the artists leverage existing templates to their benefit. From past shows, whether it is fire work from Escape Room: Tournament of Champions or water work from past seasons of Sirens, the artists never have to go far for references or headstarts. 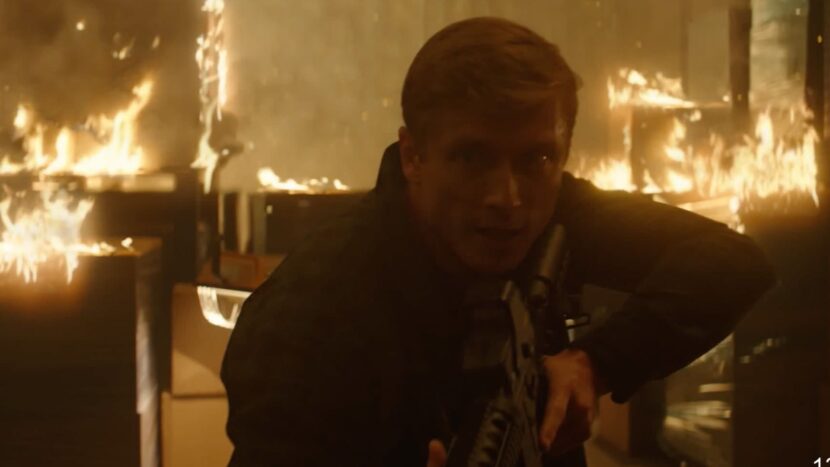 FXG: This was set in Georgia but shot in Canada?

Bert Poole:  Correct. Reacher is set in Georgia but was shot in Toronto. The production built a practical Margrave set in the suburbs of Toronto with the main buildings from Reacher, the bulk of which were just facades. SpinVFX had the task of fleshing out the rest of the town with digital buildings, streets, and town features. One consequence of shooting in Toronto is that the environment is very dynamic, coming to life from spring to summer. When shooting began, the trees were bare and the grass had not yet come in. In addition to filling out the town, SpinVFX had to augment most of the shots in the first few episodes with leaf coverage that would match later-shot scenes. This included furnishing every tree in the Margrave town square with leaves, adding greenery to the outside of the police station, and filling out trees seen in the reflection of the barbershop window. None of this is especially unusual as we also had the task of fashioning a Parisian street out of the Esplanade in Toronto while removing Canadian banking advertisements from the scene. We converted an office building into a hotel via digital matte painting. 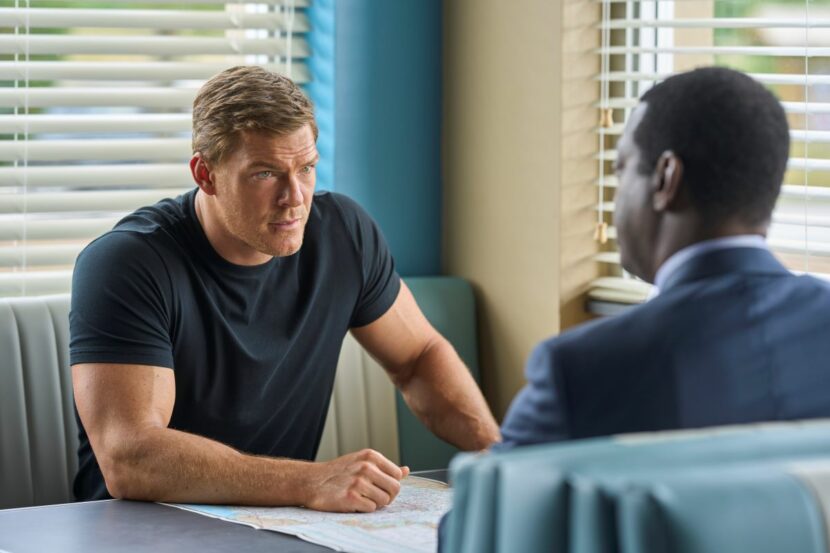 FXG: Thanks so much