Behind the scenes of ‘Secrets of the Hollywood Archives’.

I personally miss the behind the scenes documentaries that used to be plentiful on DVD and Blu-ray releases. Even then, some of those featurettes never quite went deep enough into the making-of minutiae for two my favorite filmmaking areas: sound and effects.

Enter Craig Barron and Ben Burtt. You will know their names, of course, from the worlds of visual effects and sound design, respectively, for which they have both won Academy Awards. In recent years, the pair have also been sharing their love of movies with breakdowns of how the crafts of effects and sound were used on classic, often pre-digital, films. And, excitingly, they’re now producing a series of five-minute documentaries for The Criterion Channel.

The series is called Secrets of the Hollywood Archives, and include re-creations of specific shots from the classics. For example, one episode dissects the use of miniatures and other effects to depict the landing of the C-57D flying saucer on Altair 4 in the 1956 film, Forbidden Planet. Further eps explore Lloyd Bacon’s Action in the North Atlantic (1943) and Henry King’s 12 O’Clock High (1949).

befores & afters caught up with Barron and Burtt to find out more.

b&a: What did you set out to achieve with these ‘Secrets of the Hollywood Archives’ pieces?

Craig Barron: We’ve done special features for Criterion on their Blu-ray releases, which we love to participate in. Those are documentaries that are anywhere between a half hour to 45 minutes, sometimes even an hour. This is a version of what you can enjoy through a streaming service. Meaning, that when you click on Forbidden Planet on the subject page, our little documentary comes up and says, ‘Would you like to know a little something about how the film was made?’ And you can either watch it before the movie or after the movie as a way to supplement or add appreciation to the experience of watching the movie.

We’re very excited about it because it allows us to participate through a streaming service. Since Blu-ray and DVDs are now starting to become fewer and farther between, the market isn’t quite as strong as it used to be. But the appetite for learning about how films are made and some of the behind-the-scenes from classic movies still exist among the public. So we wanted to find a way to address that through Criterion’s streaming channel.

b&a: How did the two of you begin doing these behind-the-scenes featurettes in general?

Ben Burtt: Of course, we both worked at Lucasfilm, but we actually met outside of Lucasfilm at a gymnastics class, an adult class where we both thought we were swashbucklers, learning to do some movie stunts. We discovered in meeting at the gym that we had a mutual interest in movie history, and that developed a connection over the years.

We started doing some shows for the Academy. Our first was The Rains Came, followed by Robin Hood. We still do them. We’ve shifted over pretty much doing them for TCM every year, one or two programs, at their film festival. Our last one was The Flame and the Arrow, a swashbuckler with Burt Lancaster. We still do the live show in which we display the production story behind a selective feature, which has visual effects and audible effects or stunts.

Our goal always is, what can we find to show our audience something new that they don’t know about this film? Like an outtake of footage, or behind-the-scenes footage, or the original sound. Or an artifact we can study to reveal the things we love about the film.

b&a: I personally love seeing those things. And as you mentioned, featurettes on DVDs have almost disappeared in a way. What’s your view on the state of play of featurettes?

Craig Barron: We just love these classic movies. In some cases, that’s what inspired us to want to be filmmakers and get involved in creating imagery. What Ben and I try to do is talk shop: ‘Why is this interesting to people working in the industry?’ We’ll say, ‘We think you should take a look at it, that it’s worth your time and attention to think about the creativity that went into conjuring these images, which were so impactful that it got a whole generation of visual effects and sound practitioners interested in wanting to make movies.’

b&a: You just showed me your Forbidden Planet piece, are you able to talk about some of the others?

Craig Barron: We did a Humphrey Bogart film called Action in the North Atlantic. It’s a submarine picture and it has great visual effects in it.

Ben Burtt: Yes, there’s amazing miniature torpedoes, firing underwater, in that film. We discovered some outtakes showing the mechanism that they used to film it in a studio tank. The other show is 12 O’Clock High, the 1949 film starring Gregory Peck. It’s a movie about strategic bombing and its effects on men’s psyche in World War II. We talk about how they put actors in flying bombers and so on.

The idea on this current series is a ‘short order cook’ kind of thing, where we talk about one shot or one technique. We obviously have to give a little of the background about who made the film and when, but it’s not a complete story, like a doc that’s all revealing. It’s to entice you into an interest and appreciation of film by showing some of the clever creativity that went on in its making.

These all tend to be analog-type solutions to visual effects, problems and challenges. I always say it’s a little bit like Antiques Roadshow. You’re saying, ‘Here is a craftsmanship and artistic skill that was a very important at one time.’ Somebody had a great idea. It still may exist in some derivative form today. But nonetheless, without CG techniques, they faced a completely different technical pathway in order to create illusions.

Craig Barron: Our series is more like an appetizer or an after dinner mint than a full meal. 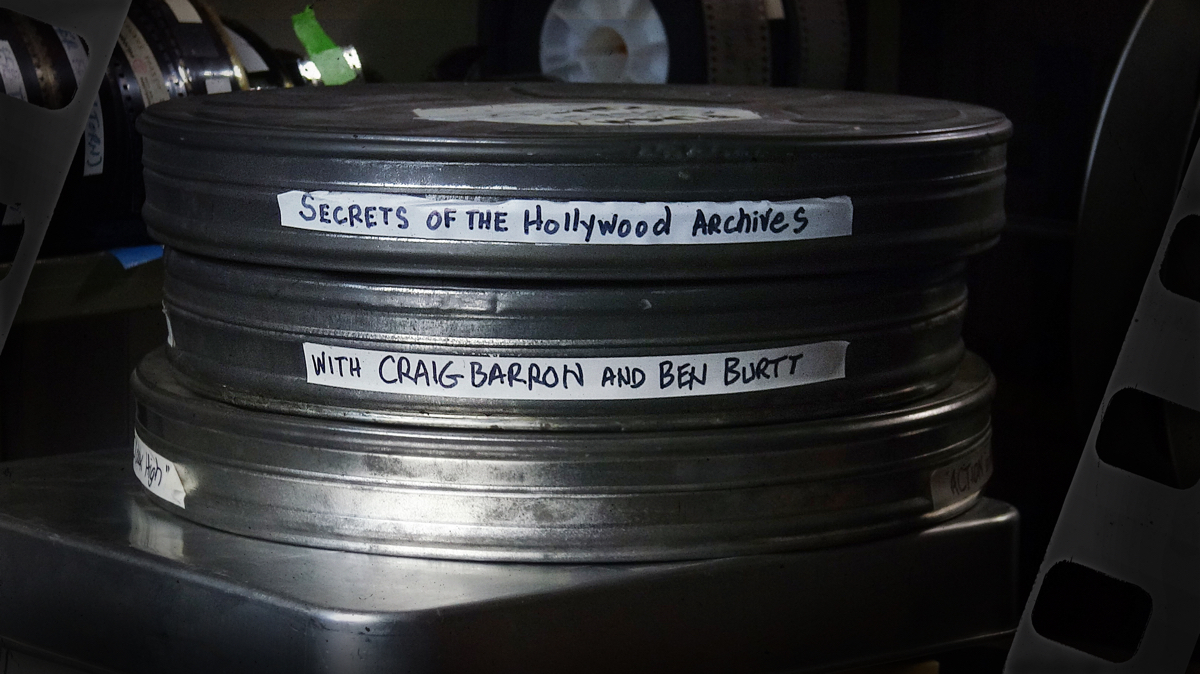 b&a: Ha, I like that. What have been some of the challenges you’ve found in researching the sound and visual methodologies used on these older films? How tricky is it sometimes to dig into this stuff?

Ben Burtt: The occurrence of behind the scenes footage prior to the Star Wars era is few and far between. There weren’t documentary crews roaming around every set. The studios kept secret what they did, or they also thought it wouldn’t be interesting to the public. No photos were taken and nothing was shared. So, finding information about how things were done in visual effects and especially sound effects is extremely difficult.

There’s many films we’re interested in where we can’t find something revealing about them. We can only make guesses. So it’s quite precious to us to find any strip of film or a series of photographs or sounds, which tells us, ‘Oh, wow, so that’s what was done.’ And it gives us a story to build around.

We have lots of films we’re interested in where we don’t have enough information about them, maybe one or two little things. We wait until it hits a critical mass. That’s why the shorts idea works in many ways, because it’s pretty hard to find enough information to make a lengthy documentary, but there’s enough material to reveal a more restricted subject, focusing on one detail.

Craig Barron: As Ben was saying, these classic movies were made way before there was much documentation on the set or behind the scenes or making ofs, so we often will use computer graphics as a way to help explain the footage that doesn’t exist. Our thinking is, if we were on the set and had a 16 millimeter camera, what would we love to take a picture of? We can recreate a simulation of that through computer graphics, which becomes educational and instructional about a complicated concept that we’re trying to explain. And then we have visual material that’s created that helps the audience understand the technique that we’re discussing.

b&a: Just finally, I love how you’re both on-camera recording your sound bites in front of a flatbed editor.

Craig Barron: It’s unfortunate that most people won’t know what it is, but it’s what we used to look at film on all the time. Our theme is that we’re looking through archives where footage was stored and we’re finding discoveries, like an archeological dig. If you notice, we’re wearing our Indiana Jones leather jackets to suggest that we’re on an adventure. And that’s a little embarrassing because Ben and I, well, neither of us look like Harrison Ford at all in these scenes, which is disappointing personally.

Craig Barron: But the idea is that we’re on a journey of discovery, and then we bring back what we found to the audience.

You can see episodes of Secrets of the Hollywood Archives at The Criterion Channel. www.criterionchannel.com