The props master (or “property master,”) is the head of the props department on any film. They are responsible for all props in the production—that includes acquiring them, keeping them organized, and making sure they’re used safely. To do this, the props master leads a team of prop makers or props-department runners, and reports to the production designer. They are responsible for purchasing, acquiring, manufacturing, properly placing, and overseeing any props needed for any production. Increasingly this role, as with many other art department roles, involves tight coordination with VFX as props often need to be both practical on set – and reproduced or enhanced digitally in post-production. Props are also at the forefront of complex 3D printing and manufacturing processes, with key CAD and 3D files needing to be interchanged to be used in packages such as Maya and Houdini later in production.

Dean Eilertson, Property Master, is an avid sailor who is well known in the film industry as a very well respected Property Master, with over fifty feature films to his credit, including Godzilla, The Revenant, and Mission: Impossible – Ghost Protocol.  Dean was the prop master on The Adam Project, we spoke to him about his role and its relationship to new technologies and VFX.

The Adam Project tells the story of a fighter pilot Adam Reed steals his time jet in a dystopian 2050, and escapes through time on a rescue mission to 2018. However, he accidentally crash-lands in 2022 instead where Adam meets his 12-year-old self who is struggling with the recent death of their father. Adam reluctantly enlists his younger self’s help to repair his jet and repair the timeline.

As with most Sci-Fi films the cast was required to use Hi-tech props from the future to help solve the past. These props ranged from attack Hoverdecks to Crystal Light-Drives. Nearly all of these items were handled by the cast and in the context of the story, they all needed to seem to come from Sorian Tech, the evil future tech company controlling time travel. This meant that even vastly different items such as guns and Light-Drive Cradles need to have the illusion of being based on the same technology, from the same cultural and physical entity. Many of these props also had to be extremely tough and able to used in fight sequences, and seamlessly matched to digital props when needed by the visual effects team. The Production Designer was Claude Pare. The visual effects supervisor was Alessandro Ongaro, with the majority of the visual effects being handled by Scanline, DNEG, and Lola VFX (who did about 40 de-aging shots). 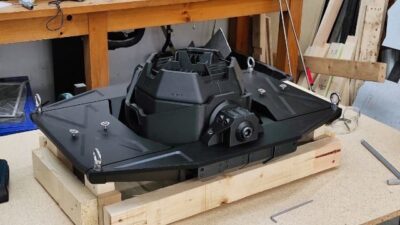 For the visual effects teams, it was key to match the futuristic props, while scanning and photogrammetry provide an excellent reference, Dean Eilertson likes to provide actual data files from the fabrication teams – so that the actual models can be imported directly. Dean supervised the Australian team Super Vixen who did a lot of the key hi-tech design and Pantheon Design who did much of the 3D printing and fabrication. Shawn Levy had recently shot another film in Toronto with two Korean brothers. “Sean was really adamant that we used some of the concept and illustrators that they had used, in particular, a couple of guys who called themselves Super Vixen from Australia,” Dean explains. “I didn’t know who they were, I’d never worked with them before”. After the usual NDAs and a zoom call, Super Vixen submitted their first designs, and Dean was actually “a little taken back because, I was expecting more.”  Unlike American concept designers who “can take days and days photoshopping something,” the Super Vixen team quickly came back with just early sketches. Of course, their ideas were very strong, and they then developed them into extremely detailed designs, winning Dean over completely in the process. But Dean is the first to admit that for over a decade he used to build scenery and complex film props with just a pencil sketch from a production designer. Unfortunately, in the modern age, designers often tend to want to polish design work before showing it to clients. “But then as we got into it,” Dean points out “I went: ‘oh my God, this is like the perfect platform to have a conversation about what your idea is’”. Dean would take Super Vixen’s early work to the Director, Shawn Levy, and “I could sit with him and we could go through it.  We’ll circle things on each page that he liked and so on.”  He would then go back to Super Vixen, “and the next presentation would be the really slick presentation.” Super Vixen would go on to produce the designs for many of the props, the HoverDeck, the MagCell, the pulse grenades, the Shock Baton and many other key prop designs.

For some years, since his work on Percy Jackson in 2013, Dean has aimed then get all the designs produced in a digital file format that would be helpful to all the other crafts, not just props. Most of the props in The Adam Project were made using CNC milling machines and expensive high-end digital printers via Pantheon Design. But this was unusual, a lot of prop companies got into 3D printing early and got burnt in the process. While a lot of prop building shops saw the potential of 3d printing, “they invested too heavily, too early,” comments Dean.  The earlier printers were too slow, the resolution of the machines was inadequate which led to too much hand finishing. “You lost a lot of detail and the durability of the parts would not survive a feature film prop environment.” For example, Dean recalls on one of the earlier X-Men films they tried 3D printing Cyclops special glasses. “We printed the glasses, but they only fit him (James Marsden), and if you flexed them even the slightest bit, they would break -a pair of glasses gone at $3,000 a pop.” 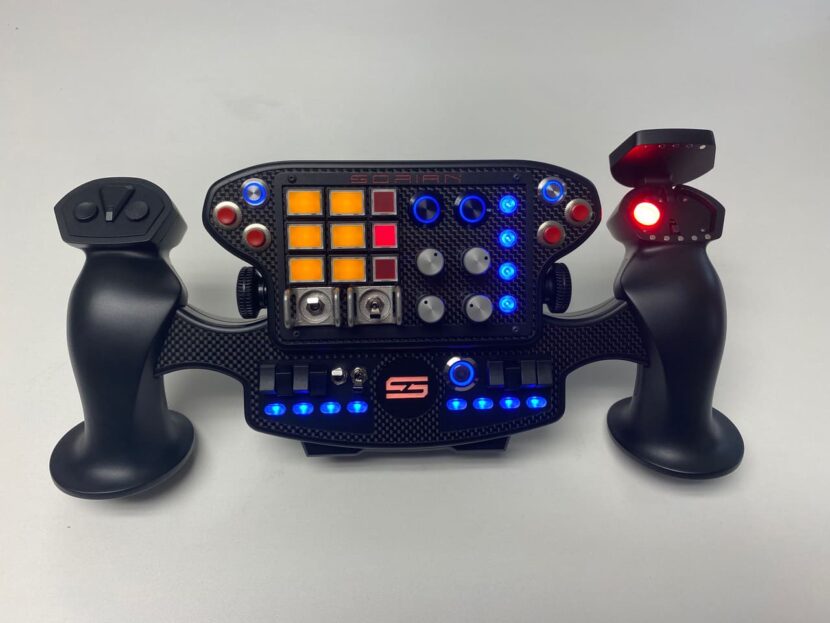 Improvements in just the last couple of years have changed this. Pantheon Design uses new industrial 3D printers that proved more than up to the task of producing high fidelity robust props. Pantheon Design was started by five engineers, “they’re all young, brilliant guys and they have a passion for rapid prototyping,” Dean explains. The team is not solely focused on the film industry, they have worked extensively on rapid prototyping for motorcycle parts and for medical equipment. One of the more durable materials the team printed using is a carbon fiber infused medium, this allowed Dean to give the actors lightweight props that they could smash on the ground or use in fights without fear of the props breaking. “The printed parts have become so durable. The pulse rifles, for example, they are all 3d printed and actors were crawling through gravel, pushing them forward, dropping, falling, using them in stunts with a durability that has never existed before.” The Pantheon Design props were so successful that The Adam Project caused the team to rapidly expand. Over the Xmas break in production, they scaled to 16 concurrent machines by borrowing and using other companies’ machines while they bought and installed more in their own climate-controlled 3D printing room. 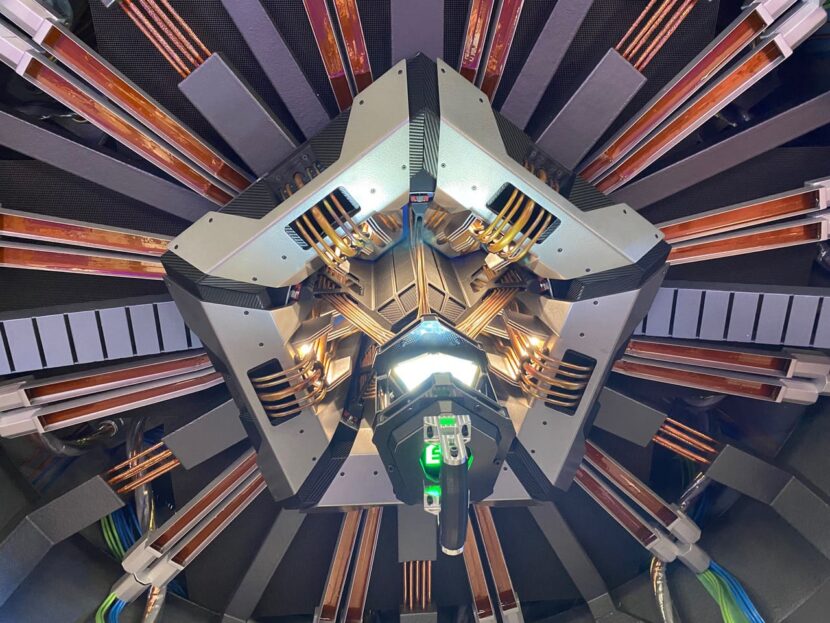 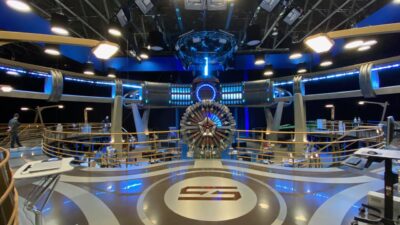 The team were turning around some complex props in just three weeks. For example, the Crystal Drive was a vastly complex 3D printed and CNC milled prop. The crystal hard drive piece involved over 200 3d printed parts for a prop that is close to 30 inches in diameter. The 3D printed parts normally need painting. While there is color 3D printing, Dean is not a fan. The color printers use a system of cartridges much like an inkjet printer but each cost about $6000. “And when working that way, you have committed yourself to that color and if you need to switch colors or medium, you have to wash and flush all of the material out of the machine and start over again with something else. It’s a very slow process.” Dean does however try and use the correct material whenever possible, otherwise, parts are painted or wrapped in various types of carbon fibre vinyl. Everything is aged and treated according to its imagined technical role in the film. For example, the drive had copper tubing. this was meant to be part of a cooling system. “And of course, the cooling system would heat up, so it should discolor.” The team discolored all the copper with blowtorches, other parts were treated differently, – all in an effort to provide visual authenticity. “Since the age of digital cameras, it’s pretty well impossible to fake anything anymore,” he jokes. 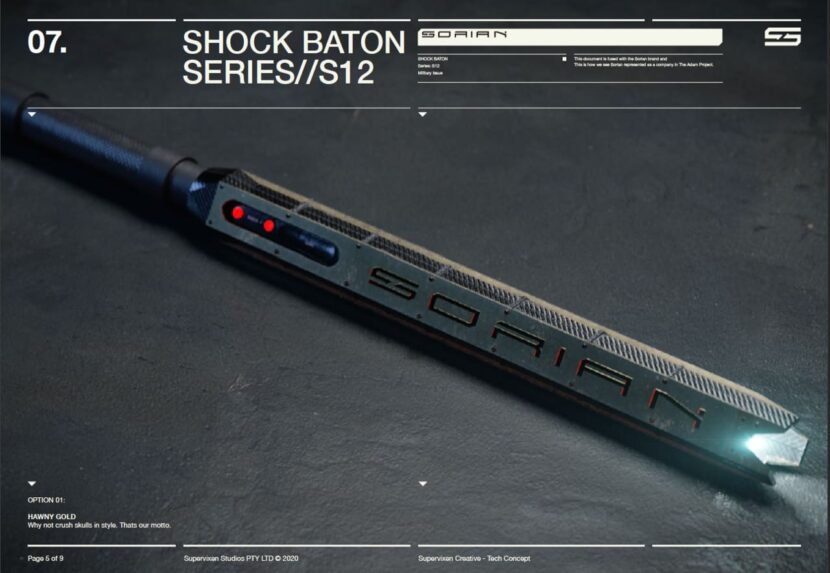 The drive files were then handed on to the VFX crew who extended the set and prop from the core unit that actor Mark Ruffalo handles, to integrate it with a much larger digital set. But to get the right lighting on Mark’s hand and body as it removes the drive. The physical prop was rigged with a complete remote DMX lighting system of LEDs. This allowed standby props on set to hand over to the lighting department a prop that could create any color or pattern as needed for the DOP and the Director to get the shot they wanted. With the MagCels the team designed the on-set props specifically for VFX to track. “It’s just not a piece of machine aluminum with detail on it,” comments Dean. “We had built it in a way that we could put a carbon fibre rod through it. We talked to VFX and stunts about ways to help VFX track it, and still give the actor a chance to physically swing it towards somebody.  The team made shorter versions for when it was meant to cut into someone, longer versions with all kinds of variations, and in-built lighting – with different color temperatures avoiding separate LEDs that produce a DOP-unfriendly type of light or quality of light, onto the actors holding them.  The most complex in-built lighting was the ship key/dog tag that Ryan Reynolds has around his neck. “When Ryan grabs the dog tag, it’s a warmer LED light and it has a slow pulse since his DNA isn’t tripping the device.  It’s not reading him as fit to fly, and it’s not going open and give him access,” points out Dean. “But when young Adam, who has the same DNA, grabs it the tag becomes super bright – that’s all practical in the smallest lighting piece of lighting equipment, I think anyone’s ever seen!”