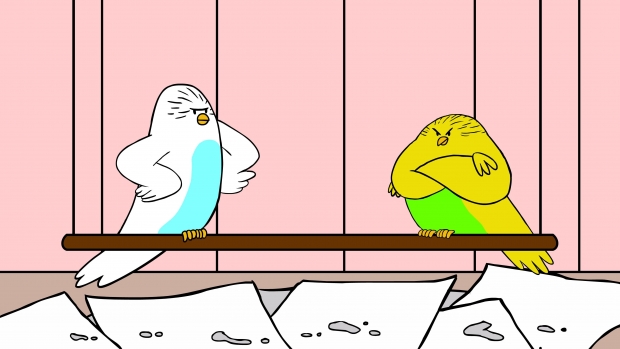 It seems like just yesterday (really… 2018?) that AWN talked to The Parakeets creator Greg Capin about his “weird indie project.” The 2D animated web series follows two bickering parakeets and their owner. And the all-new season, albeit starting three years later, is every bit as chuckle worthy as it was when it originally dropped.

The show features the misadventures of caged bird life starring Nubert the Nice, Kirby the Devious, and that owner Greg. Season 2 picks up from the fallout of the finale of Season 1’s battle over Facebook likes among other things.

In first episode of Season 2:  “Mothy and Flyboy,” Kirby makes some new “friends,” while doing hard time in the Punishment Cage and Nubert gets a new arts & crafts project.

After you’re done, head on over to the show’s YouTube page to binge past and new episodes. Afterall everyone can use a good chuckle now and then.