The visual effects of Robert Eggers’ ‘The Northman’

See the work BlueBolt crafted for the film.

It’s rare for me to publish a press release directly on befores & afters, but in the case of BlueBolt’s visual effects for The Northman, I was really keen to showcase the work by the VFX studio in the Robert Eggers as soon as possible.

Here’s BlueBolt’s breakdown of their sequences, which made up 279 of the 388 VFX shots in the film, many of which had lengthy frame-lengths. The press release also includes several before/after images.

Based on the legend of Prince Amleth, The Northman is a revenge thriller from director Robert Eggers that chronicles the story of a Viking who seeks to rescue his kidnapped mother and avenge the death of his murdered father. The film stars Alexander Skarsgård, Nicole Kidman, Claes Bang, Anya Taylor-Joy, Ethan Hawke, Björk, and Willem Dafoe, and was filmed from August to December 2020 in Ireland with New Regency Productions.

BlueBolt was brought on board as lead vendor by producer Mark Huffam, with Angela Barson as the overall VFX Supervisor, to create the extensive visual effects required by this production. Over 90 per cent of the film has visual effects, and the majority of shots were very long; the average shot length was 474 frames, which is just under 20 seconds. Nine shots had over 2000 frames, and the longest shot, which was made up of five plates stitched together, had 4851 frames – that’s 3 minutes 30 seconds! All of the complex work was covered by BlueBolt, with the facility delivering 279 of a total of 388 shots in the feature. 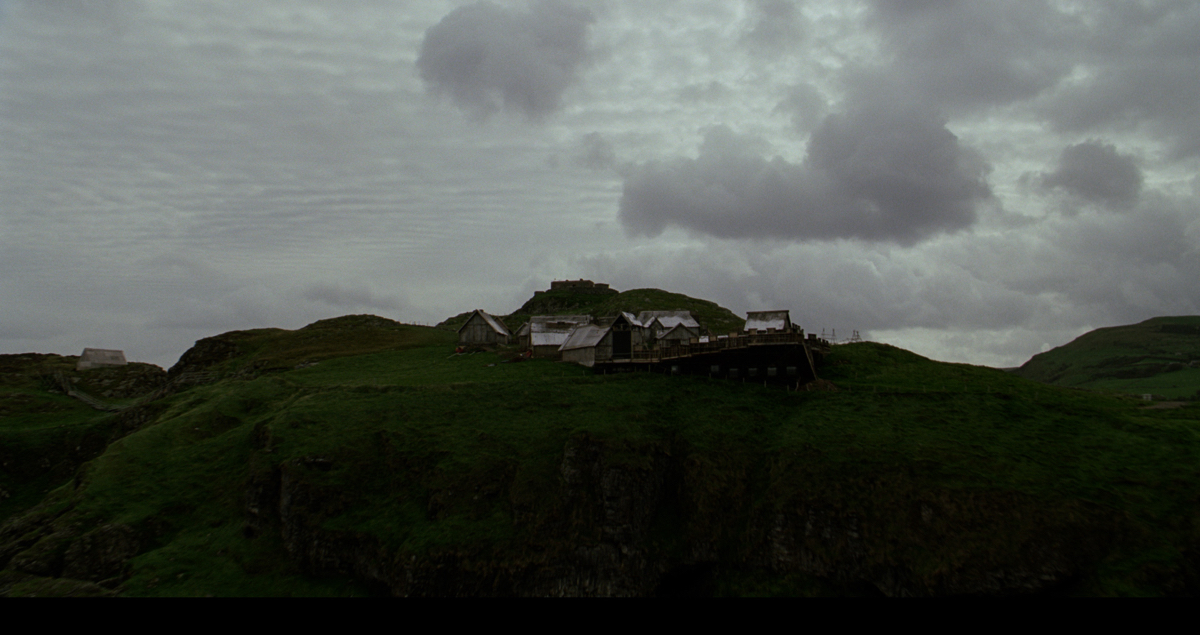 Angela was brought onboard very early in the prep process. She worked closely with Robert Eggers, Jarin Blaschke (DP) and Craig Lathrop (Production Designer) for months before the shoot to help plan what would be shot practically and what would need VFX. “Robert and Jarin were very keen to film as much as possible in camera,” says Angela. “However, with an erupting volcano, a character without a nose and a fight on an active lava field, VFX was always going to play a big part. There are some very complex shots in the film that required a lot of planning, especially the invisible stitches for the scenes which ended up being one long shot.”

The team at BlueBolt consisted of 47 2D artists and 36 3D artists led by VFX Supervisor David Scott, VFX Producer Theo Burley, CG Supervisor Philip J. Robinson and Head of 3D Nic Birmingham. A vast and various range of shot types put this CG powerhouse through its paces: there was extensive environment work, CG ships and water, creature work and an erupting volcano. One character had to have his nose digitally removed and replaced with a stump. In addition to this, the feature was shot on 35mm film, so the team had to work with the film exposure and grain, and dust-bust many dust hits.

Much of the environment work was required because the majority of the film was shot in Ireland and had to be altered to look like Iceland. Craig Lathrop, designed and built many incredible and extensive sets on stage as well as on location.There were three main village locations which were practical builds, only one of which needed to be extended with CG buildings. “I was amazed at how much Craig was able to build practically,” says Angela Barson. “The Hrafnsey village set was built on a very exposed piece of headland on the northern coast of Northern Ireland. It was constantly battered by wind and rain with shear drops down the cliff face to the crashing sea below. It was an incredible location and an impressive build.” The team enhanced environments by adding Icelandic mountains and the volcano Hekla, as well as snow addition, sky replacements and modern day removals. 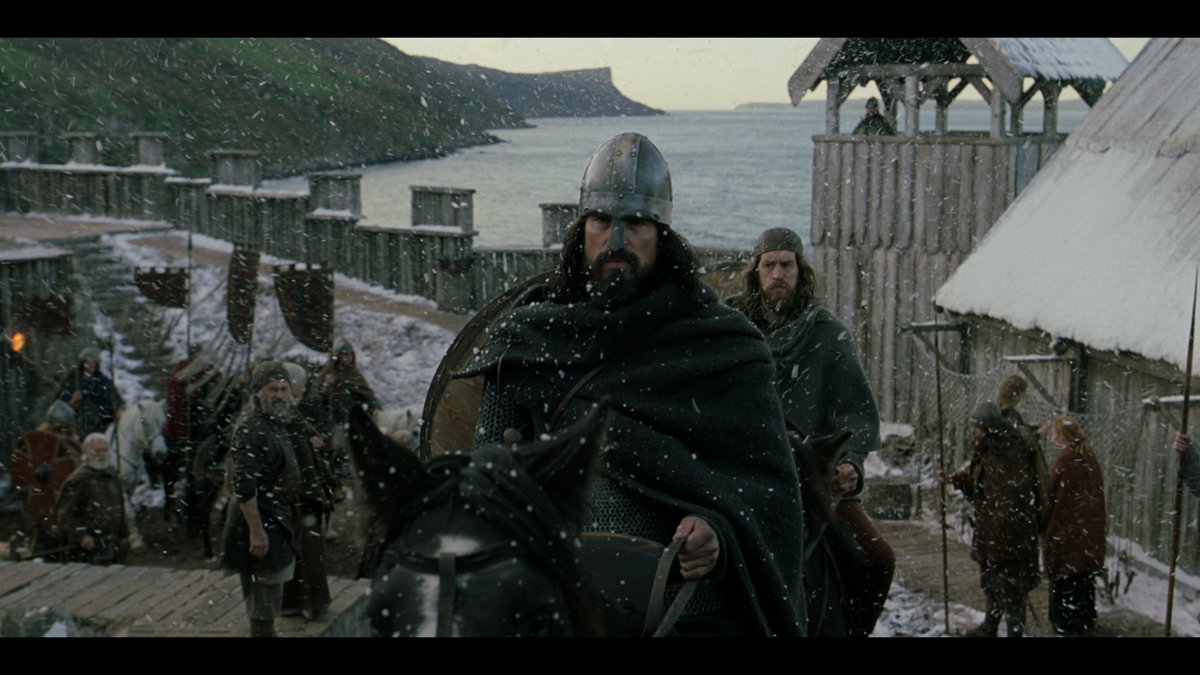 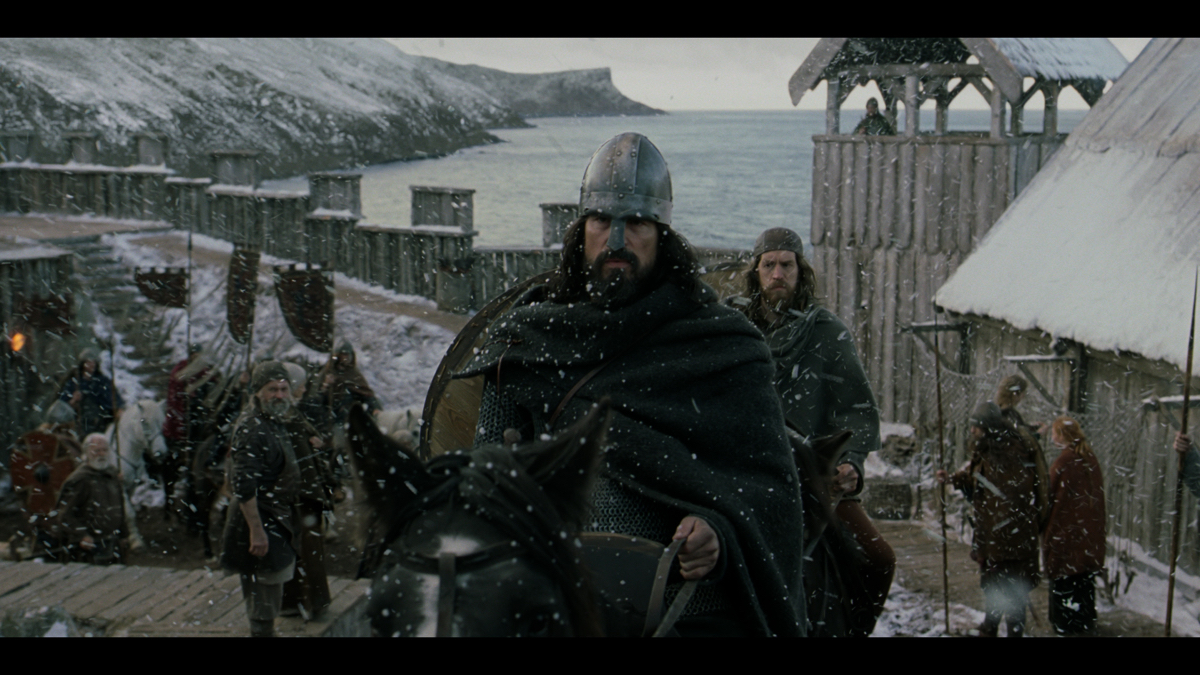 The second shot in the film is of the King’s ships approaching Hrafnsey village, and it’s particularly VFX-heavy. There’s a full CG sea with four CG sail ships, each of which containing full CG crew, cargo, and even horses. “The original plan had been to shoot a practical ship out at sea, but they weren’t able to sail in the very rough seas at the location,” says Angela Barson. “We shot a sea plate from a helicopter, but the water wasn’t rough enough so it was fully replaced with CG water. However the plate was a great starting point for the framing, timing and lighting of the shot, plus the headland with the Hrafnsey village build was in the plate giving us a major starting point for the village extension.”

CG ravens lead the camera over the water and ships, towards the Hrafnsey set, which was extended with CG buildings and CG palisades embedded into the real world cliff, meaning some reshaping of the natural environment was needed. “The entire practical environment had a DMP projection of snow coverage, with FX passes for falling snow, that the camera travels through,” says Theo Burley. “Villager elements were then used to populate this environment.”

Another sequence in which the characters travel to Iceland by ship required the team to create a CG stormy sea. “There was one wide shot of a full CG ship traveling through a very rough CG sea with large waves, spray, lighting and rain,” says Angela. “The close up shot on the ship was filmed on a greenscreen stage with a partial ship on a gimbal, and huge dump tanks were used to have practical water crashing over the sides of the ship. Overall a very impressive setup from the Special Effects team. We added massive CG waves into the background.”

This film is very heavily rooted in Norse mythology, which brought with it a few sequences that centred around Yggdrasil (the tree of life), Valholl, and the “Place of Visions” that depicted Amleth’s ancestral lineage. These were all CG constructions, paired with macro chemical photography element by the artist Chris Parks, that had to sit within the gritty realism of the film. Finding that balance between mysticism and photorealness was a challenge in itself that required a lot of collaboration of ideas. 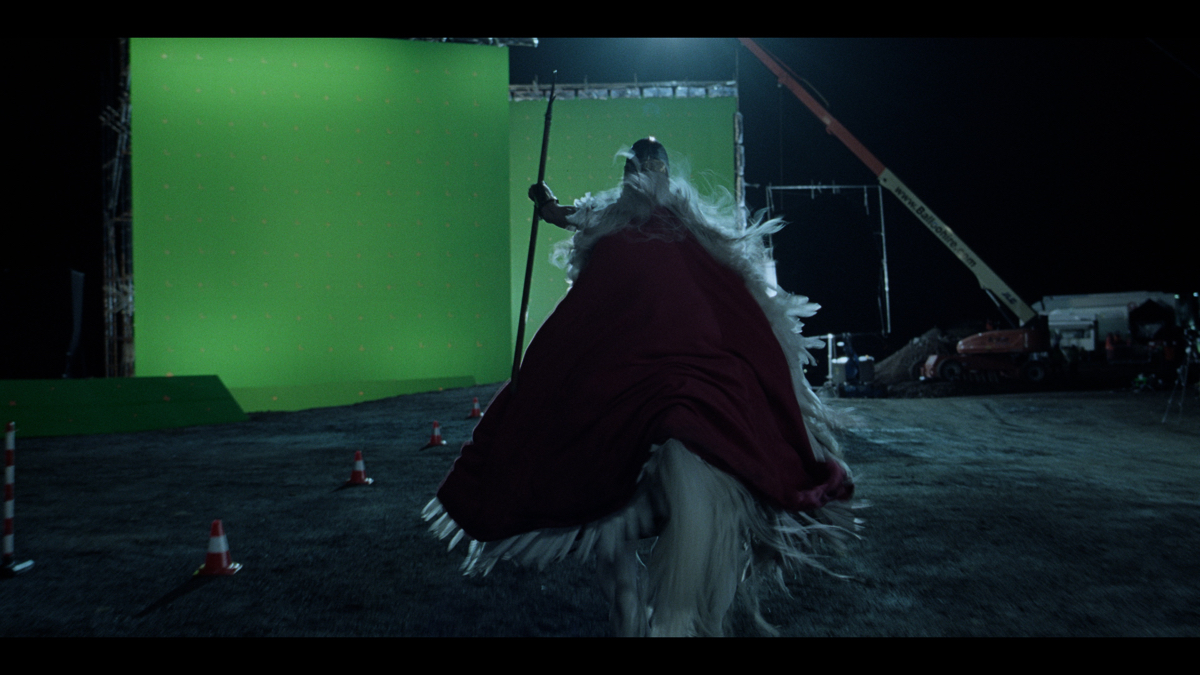 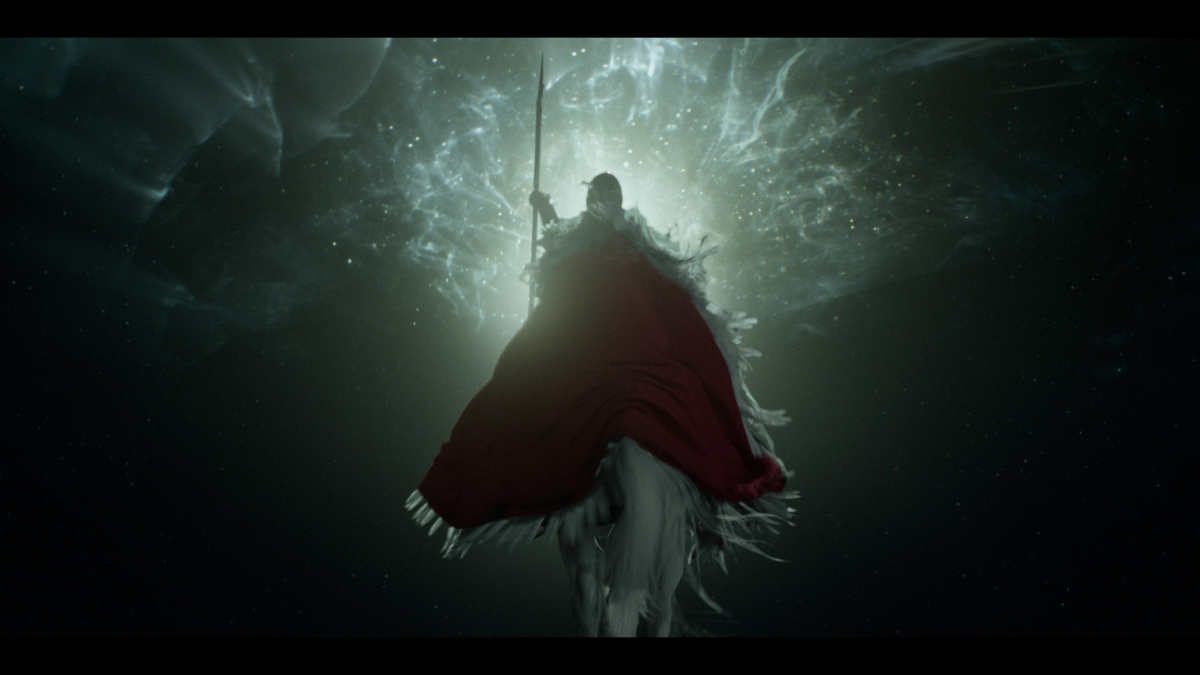 The Place of Visions was heavily prevised and is first seen when King Aurvandil’s body melts away to reveal a ‘blood tree’ growing from his beating heart. The camera then travels up the tree, past numerous ancestors, and through various FX elements of atmospheric halocline and particulate. The ancestors (5 prosthetic and multiple extras in costume) were filmed against greenscreen at high speeds – all to the specifications that were determined by BB during the pre and tech vis stages.

This is such a long sequence, and as it is very heavy on the CG there was very little room to hide. This meant there were many iterations with the Director in order to really secure the look and feel. You may even be able to spot a werewolf hidden in the background.

When the story moves to Iceland, the volcano Hekla plays a very central role. It is visible from Fjölnir’s farm and is the location of the final battle. A camera team were able to wait out poor weather and shoot clear plates of Hekla. BB then added large scale FX plumes of smoke, with volcanic lighting emitting from within the plumes. Hekla is then seen in full eruption mode – the mountain split open and lava, rock and smoke are thrown from the volcano and spew down the side of the mountain. The long durations of these shots allowed the opportunity to produce beautiful imagery that holds the eye.

The final fight between the two main characters takes place on the side of the erupting volcano, requiring the addition of lava, fire and smoke, as well as face replacements for stunt doubles, and blood and wounds.

“This was shot at night, in November, in a quarry just outside Belfast. To say it was cold is an understatement,” says Angela. “Both actors were naked, wearing just enough clothing to protect their modesty and their feet, although not enough to keep them warm, all of which had to be removed in post to leave them fully naked. Lights were placed on the ground and sides of the quarry where the CG lava was to eventually go, so that the lighting on the actors worked with the CG lava. We filmed with some SFX smoke and fire, which was then heavily augmented in post.” 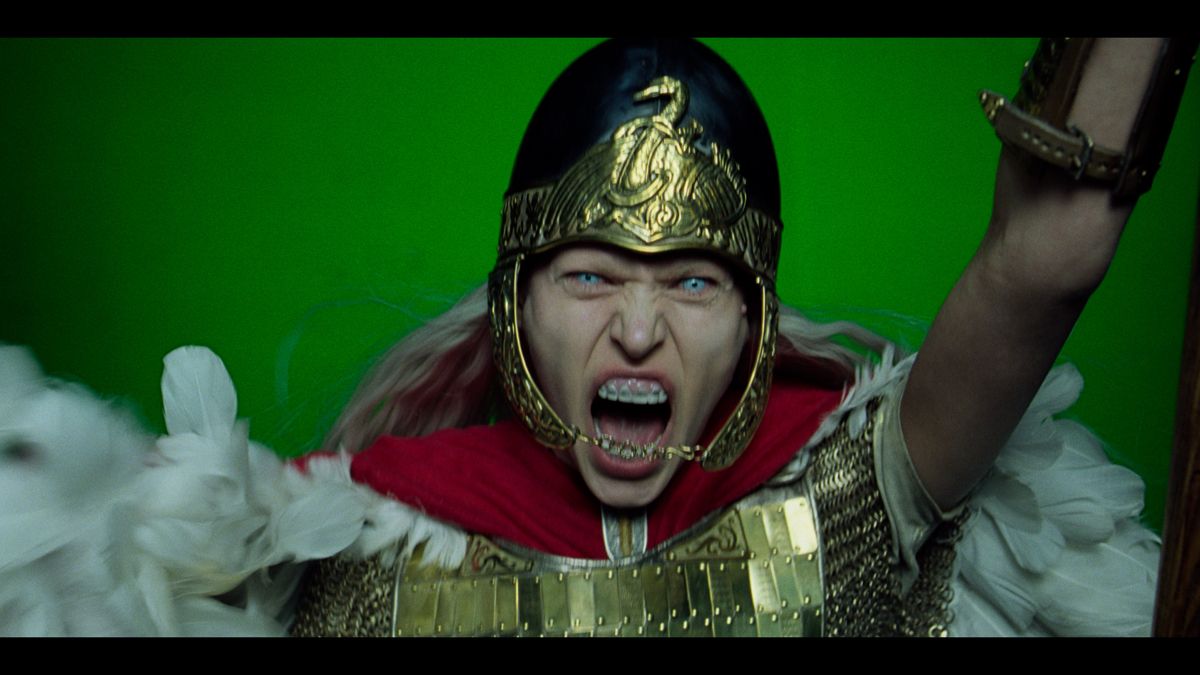 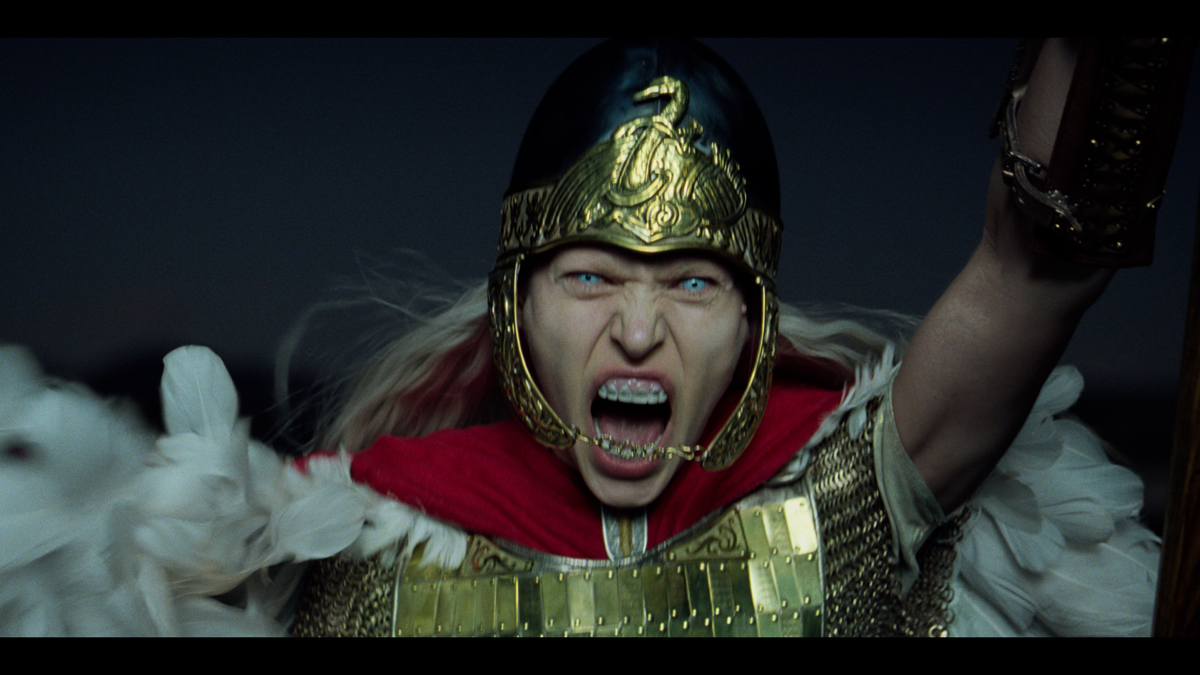 The opening shot of this sequence was filmed in sections and then stitched together into one long shot. The actors and stunt doubles swapped in and out during this scene and seamless switches as well as some face replacements were required.

The team added CG lava flowing down the hillside in the background with a river of lava flowing through the area of the fight action. There were CG sword extensions, addition of some nasty wounds, blood and a beheading. Additional fire, smoke, ash and embers were also added in CG. The resulting sequence makes for a visually stunning and memorable fight.

The Northman was the first UK production to start filming after the Covid lockdown. This of course meant relentless testing, mask wearing and strict safety protocols on set. There were other added complications due to Covid travel and testing restrictions. “One of the end scenes takes place on a small ship out to sea, just off the coast of Iceland,” says Angela.

“We heavily pre-vised the scene so that we knew the camera angles and knew what backgrounds would be needed. A separate small team in Iceland shot backplates from a helicopter off the coast. We used these plates for the distant land and sky, adding in the volcanic smoke plume, but replaced the water with CG so we could get the exact water level and speed of travel.”

Overall, the biggest challenge on this production was the sheer length of the shots. “Working on them, rendering, reviewing, tech-checking etc all took 10 times longer than usual,” says David. One of the hardest shots to put together was a sequence in which the character Finnr, whose nose had to be removed and replaced with a CG stump, walks through a village at night holding a flaming torch. Getting the lighting on the nose stump was tricky. “This was a night shot, which has the added difficulty of the lighting gels, and a character who has his nose removed is in the centre of the frame, close to camera, with a firelight torch throughout the whole shot for 2500+frames,” says David.

Working with the lighting setup was also extremely challenging. DP Jarin Blaschke used custom-made filters to remove certain wavelengths from the colour spectrum when filming at night. A series of tests were shot before the shoot began using different combinations of film stocks, lights, filters, gels, bluescreen, greenscreen and redscreen to work out the best combinations for the shoot.

“Robert is a director who knows what he wants, has a fantastic eye and has incredible attention to detail,” says Angela. “Jarin is one of the most focussed, technical and exacting DPs I’ve ever worked with. That combination meant there was no room for anything other than perfection. It was a tough process, but ultimately enjoyable and rewarding. I’m very proud of the work that the talented team at BlueBolt has delivered.”