WATCH: ‘Vivo’ and ‘The Mitchells vs. the Machines’ Making of Videos 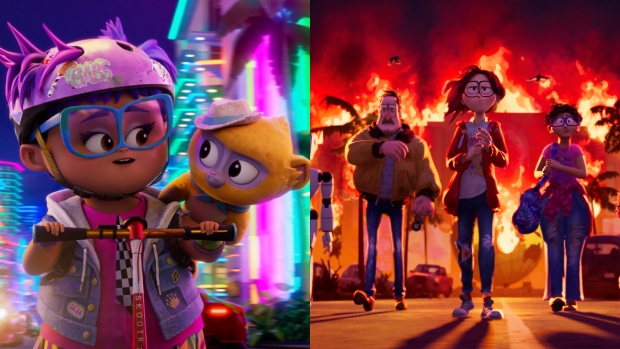 In Vivo, with songs by Tony Award winner Lin-Manuel Miranda, who also voices the film’s titular kinkajou, SPI blended 3D and 2D animation into a vibrant, colorful, and often wild celebration of music as a universal language of friendship, family, and love.

Directed by Kirk DeMicco, the Oscar-nominated writer and director of The Croods and co-directed by Brandon Jeffords (Cloudy with a Chance of Meatballs 2), Vivo stars Tony Award-winning Hamilton creator Miranda, who also wrote and performs a number of new songs. Produced by Lisa Stewart (Turbo, Monsters vs. Aliens), Michelle Wong (Cloudy with a Chance of Meatballs, Hotel Transylvania 2), and Oscar-winner Rich Moore (Zootopia, Ralph Breaks the Internet), the film is written by DeMicco and Quiara Alegría Hudes (In the Heights), with visual consultation by Oscar-winning cinematographer Roger Deakins (Blade Runner 2049).

Take a look at how the magic was produced:

Just nominated for a Best Animated Feature Oscar this past Tuesday morning, The Mitchells vs. the Machines tells the story of an old school father and his plugged-in, filmmaker daughter who struggle to relate as their family embarks on a road trip to her new college. Their drive is interrupted by a machine apocalypse that threatens to tear these unlikely heroes apart unless they can find a way to join forces and save humanity.

The Mitchells vs. the Machines features CG animation, integrated with hand-drawn 2D animation, live-action footage, and puppetry, taking the audience on a family road trip that metamorphoses into a wild ride.

Check out the amazing animation production on the film: