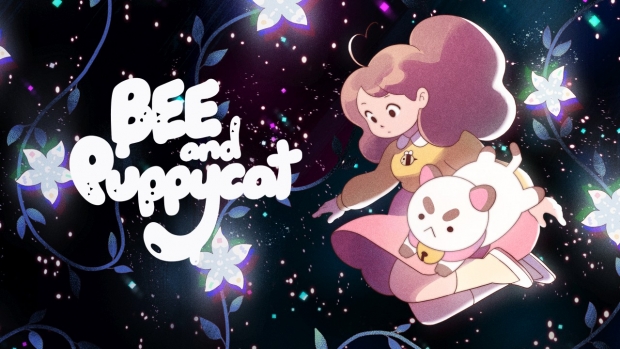 From its humble origins as a two-part 10-minute animated short for Frederator, Bee and PuppyCat debuts today on Netflix (queue applause!) with a new, “Season 2” that re-introduces the series’ characters and reimagines the original storyline before launching into new story arcs. The hugely popular web series, created by Natasha Allegri (Adventure Time) and produced by Frederator Studios (Adventure Time and Castlevania), originally ran 2014-2016 on YouTube and VRV as a set of short episodes, funded by what was, at the time, the biggest Kickstarter campaign ever for an animated series. The new season (16×30), Lazy in Space, is now available to stream.

The show follows a 20-something temp worker named Bee and her mysterious companion PuppyCat; the two travel on fantastic adventures across space while taking on various intergalactic odd jobs to help make rent.

“When I think about making stuff, I think about who I’m making it for,” said Allegri. “The person I made Bee and Puppycat for is someone who is chaotic, who likes entertainment, and cute stuff, maybe a little bit socially unaware, who wants something comforting.”

“The incredibly talented team on the series are truly outstanding,” added Executive Producer Kevin Kolde. “It’s a rush to see that early buzz has already pushed the new series to trend on Twitter and TikTok with millions of views, and we know fans will love what’s coming as much as we do.”

Bee and PuppyCat was created by Allegri and produced by Frederator Studios in partnership with OLM, Inc. with Executive Producers Allegri; Eric Homan; Kevin Kolde; Michael Hirsh; Toshiaki Okuno; Fred Seibert; Junichi Yanagihara. The art directors are Hans Tseng and Efrain Farias. The animation was done by OLM, Inc., with Allegri, Tseng, and Farias relocating to Japan during production to oversee creative direction.